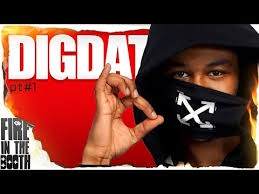 Digdat links up with Charlie Sloth for his debut 'Fire in the Booth' at Apple Music's Beat 1 Radio.

The Lewisham hailing rapper dropped his highly anticipated debut mixtape on Friday entitled, 'Ei8ht Mile' which consists of thirteen tracks with heavyweight features such as Aitch, Headie One, D-Block Europe, Tee Grizzley and more. He continues his undeniable work rate with his hard 'Fire in the Booth' freestyle.

In the first freestyle, he displays an array of punchlines and hard-hitting lyrics laid over a bass boom drill production from Ghosty. In the second freestyle, he showcases heartfelt and insightful lyrics on a piano-based dark instrumental courtesy of Steel Banglez.

Check out Digdat's 'Fire in the Booth' below and let us know what you think on our socials. If you have not already, listen to his brand new debut mixtape 'Ei8ht Mile.'

. @BigNarstie drops the visuals for ...

Black The Ripper autopsy ordered by ...

UK prepares for a pink supermoon

Footage emerges of an American priso...

. @m24gwop unleashes new visuals to 'No Cap' Prod by @quincytellem

. @HardyCaprio links up with @ChuckieOnline for the brand new series of 'The Cheque Up'

. @BigNarstie drops the visuals for ‘Memoirs Of Pain’