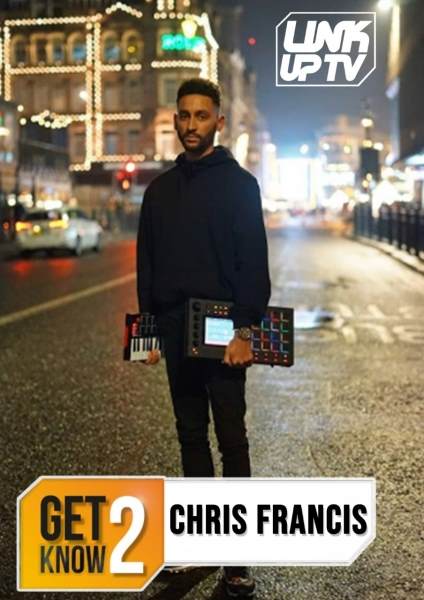 Producer Chris Francis has gained popularity from established UK artists with his uploaded Instagram videos demonstrating his production skills on a MIDI Sequencer. Infusing Grime with Gospel music the North East producer is set to bring a different sound to the scene.

I've always been a fan of music in general so the production element has always interested me. I was actually rapping before producing so that was my original route. When I was a teenager I used to get the train down to London and record in a studio down there which is where the producing started. I used to sit and study everything the in house that the producer was doing and then go back to Newcastle thinking I could do this myself if I had the equipment. These times I couldn't afford that type of music equipment so I enrolled on a music course at Newcastle College purely so I could use their recording studio for free and that's kind of where it started. It gave me a chance to experiment and I began playing the piano which gradually led to me producing. I had a 2/3 year gap where I completely stopped making music and was busy just living life but decided 8 months ago to get back into it, a lot has happened since then. Musically though Grime music made me want to start making music, it definitely sparked my interest when Dizzee first came out, Kano, Wiley and Mike Skinner (The Streets). Also Kanye West, Just blaze and Heatmakerz. I loved how they would flip a soul song into a hip hop beat. I used to think how on earth do they do this! I need to do this but with Grime! Sorry, that was a long answer! Could have been longer though...

2- Who would we find on your playlist?

Ahhh I listen to all sorts depending on my mood and what stage I'm going through in life but the past few months has been a lot of Kano, Wiley, Chip, Ghetts, Mist, J Hus, Giggs, Dave, The Streets, Little Simz, Stormzy, Mostack, D Double E, Dizzee, Jaykae, Big Tobz, Octavian. I know I'm missing a load of artists but when it comes to grime and the UK scene the list goes on and on...you know when Stormzy went through that list of UK artists in his Glastonbury set, it's like that! The list is long! I love all the old grime sets, Roll Deep, The Movement, BBK, Nasty crew etc.

Sometimes I go through through an American stage where my playlist is all Tupac(big Tupac fan), early Kanye West, The Diplomats, Biggie, Nas etc. Michael Jackson, sometimes It might even be Oasis. I love Gospel music, Marvin Sapp, Tasha Cobbs.....Mainly Grime and UK rap though. Also up North we have a big music scene called Makina, it's just part of North East culture so that gets put on the playlist every now and then for nostalgia but I'll not even get into that because if you're not from the North East you might not get it.

3- If you hadn’t chosen music, what other pursuits would you have followed?

Anything creative, I like photography, painting, I would love to design trainers and clothing. I'm actually a youth worker when I'm not doing music and have a small recording studio where the kids in the area are able to come and rap, mc, produce, sing for free...keeps them out of trouble. Music has always been installed in me from a young age so It was always going to be something I did as a main or side job.

4- Who or what inspires your creativity and why?

I'm inspired by everything but right now I'm just inspired by how far the UK music scene has come. It's mad, but well deserved, I've watched the Grime and UK rap scene from the very beginning and to see how far it has progressed is amazing. It's inspiring knowing these people have put in years of hard graft to lay the foundations, that can't have been easy! People like your Wileys and Skeptas, Dizzee, Kano etc these people have navigated through everything to make a scene, they've taken the hits, the ups and downs, broken down barriers and made it possible for people like me to come along and make music. It's pretty inspiring that people built an entire scene from the ground up. Aside from that, I'm inspired by whatever I'm listening to at the minute and life in general.

5- Who would you see yourself blending well with creatively in the UK music scene?

I would love to work with Stormzy and not just because he's popping right now but because he has that Gospel element and Grime element. My favourite beats to make are Gospel style/ Grime beats so I feel like it blends both his sides together. His vocals would sit perfectly on these type of beats. These beats are soulful, uplifing but have that Grime energy and grittiness to them. He would have the right energy, delivery and lyrical content to match that. I'd love to work with Kano too for the same reasons, I've got a stack of beats that I could hear him on and I've always been a fan of his work. To be honest, just anyone that I'm a fan or really...Chip, Giggs, Wiley, Ghetts etc. Again the list is long!

6 - What can we expect to see next from you?

I'm just trying to put in the work, make the best music I can and give out the right energy, build up the right contacts and continue to link up with artists. I don't bother with social media platforms other than instagram so I might have to start with all that but I'm not gonna lie, I cant be bothered with all these different platforms, there's too much! Back to the question though, over the past few months I've had some of my favourite UK artists vocal my music so you're going to start hearing it all as it's released throughout the year.