HomeNews6ix9ine has been released from prison

6ix9ine has been released from prison 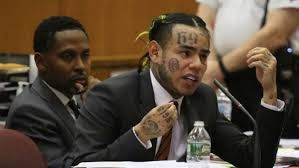 6ix9ine has been freed from prison after a judge granted him compassionate release due to Coronavirus. The Brooklyn rapper, real name Daniel Hernandez, pleaded for leniency when the disease started spreading.

His reason was that he has asthma, and previously bronchitis, and is therefore at risk of infection. He will do the remaining four months of his two-year sentence at home.

Hernandez was originally imprisoned in December 2019 on racketeering charges and was given a shorter sentence after agreeing to work with police against his associates.

In a leaked document sent on Sunday, 6ix9ine’s lawyer asked for the judge to release Hernandez as soon as possible. This follows 6ix9ine’s girlfriend - who is rumoured to have had affairs with his co-defendants - said the rapper is now a target for the rest of his life because he “snitched”.