HomeVideos. @HardyCaprio links up with @ChuckieOnline for the brand new series of 'The Cheque Up'

. @HardyCaprio links up with @ChuckieOnline for the brand new series of 'The Cheque Up' 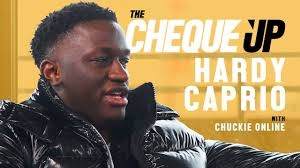 Hardy Caprio joins Chuckie for the first episode of 'The Cheque Up,' which is a brand new series where Chuckie will bring music artists for a one to one conversation.

Croydon hailing artist, Hardy Caprio has established himself well within the UK music industry by the numerous bangers he has released such as 'Unsigned,' 'Best Life,' 'Super Soaker', 'Guten Tag' and plenty more.

In this in-depth one to one conversation, Hardy discusses his musical journey, music criticism, home life, what to expect for his album and much more. This was a very insightful conversation, where you learn a lot regarding Hardy Caprio mindset.

Check out the video below and let us know your thoughts about the first episode of ' The Cheque Up.'