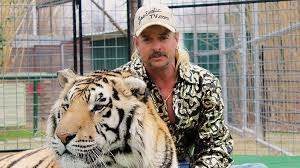 ‘Tiger King’ is a Netflix series about an eccentric, big-cat keeper Joe Exotic and the problems he faces personally and in business.

He is currently serving 22 years after being found guilty of plotting to have an animal rights activist assassinated. However some people believe the Exotic, real name Joseph Maldonado-Passage was set-up, Donald Trump Jr joked he should be pardoned.

At a press conference, a smirking Trump said he’d have a look at Exotic’s case.