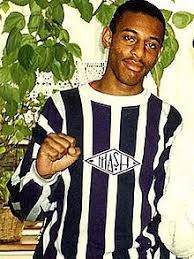 27 years ago today a 19-year-old Stephen Lawrence was murdered because he was black whilst waiting at a bus stop in Eltham, South East London.

This was a landmark case which led to the partial revocation against double jeopardy (a procedural defence that prevents an accused person from being tried again on the same charges following a valid acquittal or conviction).

Only two of Lawrence’s five attackers were ever sent to prison. Our thoughts are with Stephen’s parents Doreen Lawrence and Neville Lawrence.