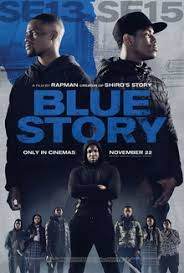 MASSIVE Cinema has announced today the launch of MASSIVE Cinema Shutdown, a series of events to celebrate cinema during the COVID-19 lockdown.

Kicking off on Friday May 1, at 8PM, MASSIVE will be hosting an Instagram Live Watch Party to celebrate the release of ‘Blue Story’, now available to buy on DVD, or rent and buy digitally. The Watch Party will be hosted by Capital Xtra’s Robert Bruce who will be joined by stars Micheal Ward and Stephen Odubola.

Written and directed by Rapman, Blue Story tells the story of best friends Timmy (Stephen Odubola) and Marco (Micheal Ward) who go to the same high school in Peckham but live in neighbouring London boroughs.

When Marco’s beaten up by one of Timmy’s primary school friends the two boys wind up on rival sides of a never-ending cycle of postcode gang war in which there are no winners… only victims.

With the aim to bring fans together to enjoy more than just the film, stars Micheal Ward and Stephen Odubola will be joining the Watch Party with host Robert Bruce live on the MASSIVE Instagram channel to discuss their own personal thoughts surrounding their roles and the cultural topics that arise within the film.

Actor Micheal Ward said: “Join Robert, Stephen and myself on Friday 1st May for an exclusive Watch Party to celebrate the release of Blue Story.

“This is a film with a very powerful message, and it goes without saying that I’m excited to join a Watch Party on the MASSIVE Cinema Instagram channel for the first time.

“Lock into the live chat where you can hang out and catch both of our reactions throughout the film while chatting to Robert - remember to leave your comments and questions for us to answer.”

David Kapur, Co-Founder of MASSIVE and ourscreen, said “In a time where we are unable to go about our usual social activities, we’re excited to bring the MASSIVE Cinema Shutdown to people’s homes, starting with the blue Story Watch Party with Micheal Ward and Stephen Odubola.

He added: “We’re really proud to host our first Watch Party with Blue Story, which generated so much conversation at the time of its cinema release.

“We can’t wait to give people the opportunity to watch more exciting British films while they stay home, and connect with talent in a whole new way, so keep watching for more.”

MASSIVE Cinema, which is part of the BFI Commission on UK Independent Film is a place where youth culture and cinema collide. Funded by the BFI, awarding National Lottery funding, MASSIVE gives young people the opportunity to experience some of the most exciting films of the year while celebrating British talent in front of and behind the camera. With the introduction of MASSIVE Cinema Shutdown and the transition from the cinemas to online, MASSIVE will become a digital celebration of cinema with virtual screenings watch parties and watchlists from some of Britain’s favourite talents.

Head over to MASSIVE’S Instagram channel (@massivecinema) to watch Blue Story’s Micheal Ward and Stephen Odubola on Friday May 1 at 8pm.

Blue Story is available to rent, download & keep; and is also on DVD.