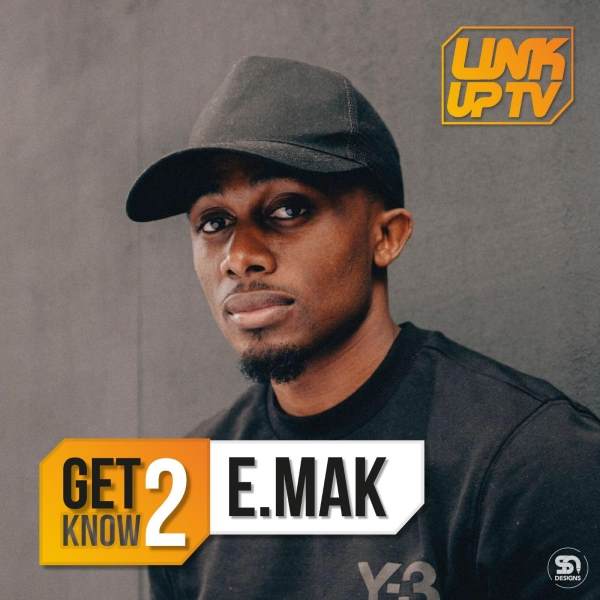 Putting West London on the map, Artist and Engineer E. Mak has established his own original sound which is an infuse of Jamaican and U.K culture. A member of collectives 6 Figure Music and Shellington High Road, E. Mak has been mixing and mastering from the beginning with musical affiliates such as Big Zeeks and TE dness. Despite attracting attention from various labels, E. Mak continues to release all his work independently, only signing with Seany Bee and Ray Paul’s label Brukout under Polydor Records for ‘Yo’ Remix. Dropping 3 tapes in 6 months, E. Mak has engineered and featured on Shellington Volume 1 Mixtape, Supply & Demand and April Showers 3.

Rae: You’ve gone from spitting on the block in Hayes Town, to appearing on pirate radio and then on to national radio. At what point did you see to notice your graft paying off?

E. Mak: To be totally honest, I feel like I’ve always had my thing in the ends. I would say when I started using social media, I was never big on it but when I started using it in 2013 that’s when it was like… Ok… People started to know… The mandem used to always say I’m dope an alla that and when I went to uni that’s when one of my bredrins said that I needed social media, and yea it’s definitely helped with outreach.

Rae: You said your new EP ‘Crack The Code 3’ is your deepest project yet. What makes this one different to the others and how long were you working on it?

E. Mak: It’s just life, I didn’t make a conscious decision in how long I took to get it done. Even the topics I’ve touched on in a lot of the songs, they're really happening in my life…I was dealing with life so music was kinda on the back burner almost. The difference is mainly the topics, the things that have happened in the last year are deeper things than stuff that may have been happening at an earlier stage in my life. It’s my best body of work yet and there are definitely tracks on Crack The Code 1 & 2 that are solid and just as good as 3, but for a start 3 has 10 tracks so it’s more already.

E. Mak: As an artist, I’d like to collab with so many people, Lauryn Hill, James Blake, Ms Dynamite, Little Simz, mainly singers you know... I’ve worked with Park Hill already but I would make 100 songs with Park Hill I won’t even lie to you. I’d put James Blake on something futuristic, nothing to spacey coz that wouldn’t be for me, but definitely, when he’s doing his live stuff there are certain things he can do on that loop pedal and drum patterns he uses that rappers can rap on. I’d love to work with Khaled as well as an artist or producer. Engineering wise, I’d like to work with Lil Durk, Mozzy, Snoh Aalegra and Rod Wave.

Rae: What’s the deciding factor that makes you want to put your stamp on the track as an artist or choose to step back and engineer?

E. Mak: If lyrics hit me, Crack The Code 3 is the first thing I’ve physically made the beat on, I don’t have the patience at all to make beats, I used to just kinda direct people and add my two pence and mix everything myself. I don’t like having to try if someone sends me a feature for example if I listen and nothing happens then it’s probably not meant to be.

Rae: Has isolation had an impact on your creativity?

E. Mak: Na not really, nuff people say, bro, you’re in the studio all the time anyway, I’m looking after people and I’m at home a lot more so it hasn’t actually impacted me as much as it may have impacted others right now. I’m just trying to launch new businesses, focus on studio, trying to get some digital bread and learning more. I’m not really a party guy like that, no rest for the wicked type of ting... But yea as for isolation, I’m in the studio or indoors most of the time.

E. Mak: I feel like this year was the first year where I’ve decided to be an artist, I’ve literally cut through the last three years. For Crack The Convo, I basically gave 3 supporters the opportunity to interview me because I said I’m not going and doing radio runs and stuff. I thought they would know the most about my music anyway so it’s best I talk to them. One of them was an artist and asked me what my experience was like releasing my first singles, I told him the first track I ever released on digital source was ‘Yo’ and he was so baffled. I told him, bro, I wasn’t a musician like that, I don’t see dropping one EP a year as work for an artist. So I decided towards the end of last year, alright cool, artist mode. For the rest of the year, you can expect to see me as an artist, I haven’t dropped enough until now, I’m going to focus on Crack The Code 3 and in a few months on to the next project and try and hit them up every season. I’ve got a roster of artists as well so one of my main things is to get that business running and have us offering the right services for independent artists.