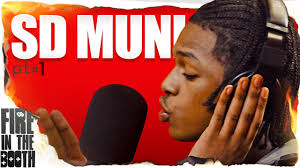 SD Muni steps into Charlie Sloths world and joins the Fire In The Booth roster, which has a heavy list of UK and international artists.

Eighteen year old SD Muni has garnered over a million views on YouTube via previous releases such as 'Cold Streets', 'The Start' and 'No Cap'.

Sd Muni uses two different types of instrumentals for his Fire In The Booth; one being a Drill beat where he drops witty lines and metaphors whilst rapping about his life, opinions and views. SD Muni also touches on the death of his cousin and how he is still affected by it today. The second instrumental is a Hip-Hop based beat holding honest sentimental value. SD Muni talks about his life and also expresses his belief in Islam and Allah.

SD Muni speaks from the heart and he is definietly one to watch as his growth is inevitable.