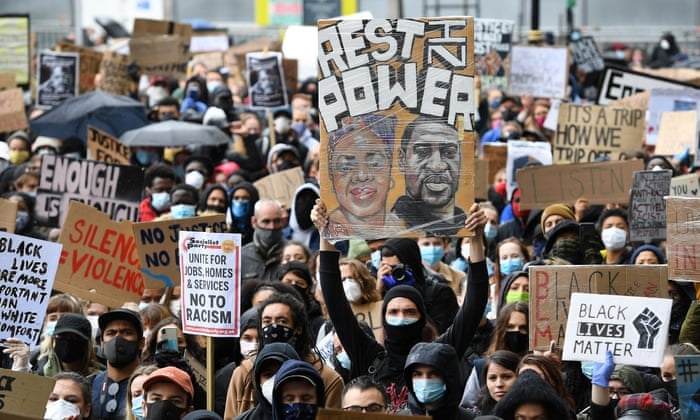 Multiple protests took place around the UK and Ireland on Saturday in solidarity with protests in the US. In London, a police officer fell from her horse and the animal bolted past the crowd.

In a tweet, Mayor of London Sadiq Khan told the protesters "I stand with you and I share your anger and your pain" and said the small minority of people who became violent "let down this important cause".

Yesterday, thousands of people gathered in the capital, the majority donning face coverings and many with gloves. Some held signs made reference to coronavirus, including one which read: "There is a virus greater than Covid-19 and it's called racism".

Thousands will allegedly be protesting today. Protests began in the US after a video emerged of Mr Floyd, a 46-year-old black man, being arrested by four officers on 25 May in Minneapolis.

Videos showed Mr Floyd, who was unarmed and in handcuffs, dying after a white policeman knelt on his neck for nearly nine minutes. The footage - seen all around the world - showed him gasping that he could not breathe.

An officer has been charged with murder while three of his colleagues stand accused of aiding and abetting the killing.