HomeNewsStatue of slave trader removed by #BlackLivesMatter protesters in Bristol

Statue of slave trader removed by #BlackLivesMatter protesters in Bristol 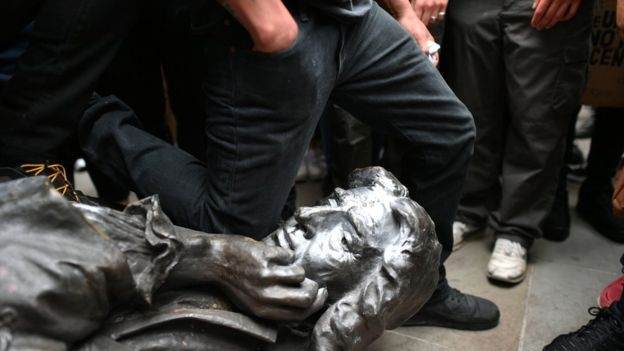 The statue of seventeenth century slave trader Edward Colston has been removed in Bristol city centre. A video circulating Twitter shows Black Lives Matter protesters pulling down the memorial to Colston, who is estimated to have transported 80,000 slaves from West Africa to the Caribbean.

It is also believed a further 19,000 West Africans lost their lives on board his ships. A ‘clunk’ can be heard as the statue smashes into the concreate, at which point the crowd erupts in hysterics.

Home Secretary Priti Patel described this as “completely unacceptable.” There have been numerous demonstrations across the UK over the last few days, protesting against police brutality - sparked by the death of George Floyd by police in the USA.

In London thousands of peaceful protesters gathered outside the US embassy in Vauxhall, and in Parliament Square. Protesters were seen taking a knee, and chanting “Black Lives Matter”, and “No Justice. No Peace.”

Watch the moment a statue of slave trader Edward Colston is pulled down in Bristol city centre during #BLMbristol pic.twitter.com/B5JuwoN4u6