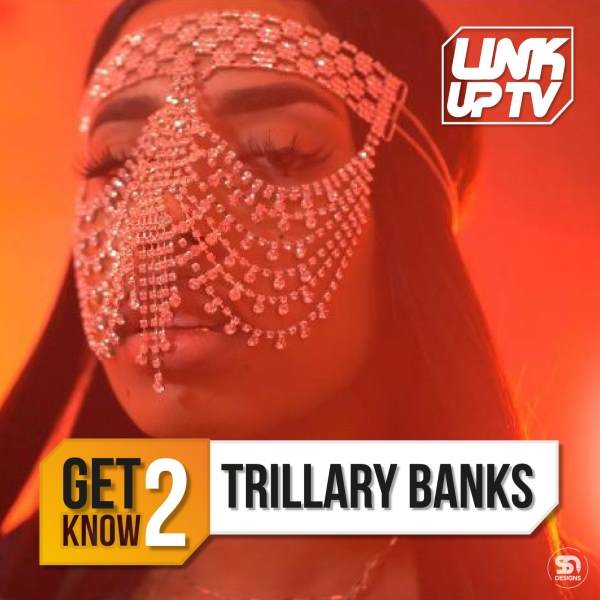 Cementing her name in the U.K music scene with her diverse and authentic artistry, Rapper Trillary Banks is known for her skillfully delivered wordplay, interchanging flows and trendsetting aesthetics. With her stomping ground leading back to Leceister, Trillary Banks has been one of very few artists not originating from London to break the U.K musical circuit. With her music remaining true to her lifestyle and experiences, she remains one of the U.K's most highly favoured female rappers.

Rae: Initially you started off as Lady Skeng, Pinky GoGetta to then go onto establish your name as Trillary Banks. What was the reason for your name change? Was it a reflection of your growth as an artist or a strategic move to accumulate a buzz?

Trillary Banks: No, I think name changes to me are kinda long if anything because it’s a big part of being an artist. The first name I had when I was really young, it was one of those names you have when you first start spitting in school and stuff. Going to Pinky, I was a little bit older and was running with that, people still call me that now.. I see myself as a worldwide artist and feel like I’m going to get there, so I wanted a name that really had that star factor that can leave a legacy. The last time I took a break from music, I was thinking that I needed to reinvent myself. Pinky was calm, but there were too many people with that name and to me, it wasn’t original. I wanted a name that reflected me as an artist and had sauce. I was very heavy into fashion and clothing when I wasn’t focusing on my music. I really heavily related to the word ‘Trill’ after hearing A$AP Rocky do a song about it and looking into it and the movement in South America. I just really related to the meaning, I think it’s dope and hopefully, people feel the same way.

Rae: Your musical influences range from Jungle, Reggae, Rnb, Bashment and Pop. Who would we find on your playlist and who are you currently listening to?

Trillary Banks: This may sound really rude, but I don’t have playlists and stuff, and I don’t listen to music like that, I don’t know if it’s the space that I’m at… I’d rather listen to Trillary, that’s me being totally honest. Sometimes I don’t listen to my music for a while, and then I’ll hear it back and take pride in what I’ve created. I can’t wait for people to actually take me in for who I am. There’s an artist called Snoh Aalegra she’s really dope and Scribz Riley, he’s talented. It’s hard to say what I listen to. I don’t mind checking out one or two songs, I’ll be here for ages trying to name you people. I went through a stage when I would listen to a lot of music, like Sade and a lot of old school stuff, but now I’m not really taking it in right now. I’m just focused on listening to my own sound, I don’t wanna be too inspired by anyone right now and I just wanna keep my sound very raw. I’ve thrown on The Miseducation of Lauryn Hill recently, I just feel like it’s a timeless piece of work. There are so many hidden gems in there, even to me as a young black woman today. Sometimes I might put on some Pink, yea... I kinda just keep it old school if anything you know. Music nowadays I can’t really relate to if I’m honest.

Rae: You’ve recently dropped ‘Drillary’ and ‘Lock and Loaded’, two very different tracks. You’re soon to release an EP, what sounds can we expect to hear on there?

Trillary Banks: It’s more Rap you know, I feel like people aren’t really taking me in as a Rapper. My heart is in Rap, I can do other things that are a lot simpler, but my heart is in the lyricism. I feel like I have a duty to make the females rappers in the U.K get the recognition they deserve, and I feel like we’re kinda just shunned a little bit. You can expect to hear some hard Rap on there, a little Bashment vibe as well but not what you would expect from me, it’s got a lot of street shit really, that’s what I will say.

Rae: You’ve said that there won’t be any female collaborations on the project this time, what challenges have you faced as a woman in the music industry?

Trillary Banks: I feel like not being given opportunities like the mandem is definitely something I would say is a challenge. Sometimes, things can get overly sexualised and you don’t always know who is dealing with you because of music, that can be really offputting. It can sometimes seem like you’re placed up against other females, in relation to who’s the hardest like there can only ever be one. That seems to be a bit of an issue because obviously, it’s hard enough as it is just being a female, let alone always being put up against each other if that makes sense. It would be good if we can just be accepted for who we are and forget the rest. When you’re not always seen as a popular girl, people can sometimes navigate to one and shut down others.

Rae: Who would you like to work with that you haven’t and who do you think you would blend well with creatively?

Rae: Have you found lockdown has had an impact on your creativity in any way?

Trillary Banks: I feel like it definitely helped me to learn more about myself, I wouldn’t say it’s been too negative for me to be fair, it’s given me a lot more passion and drive if anything. Luckily for me, I don’t see it as a bad thing because a lot of people are going kinda mad right now... It’s given me time to evaluate, a lot of the time when I just wanted to go go go, but yea it’s been good for me and I hope other people have taken the time out to learn as well. I think sometimes you just need to be still…