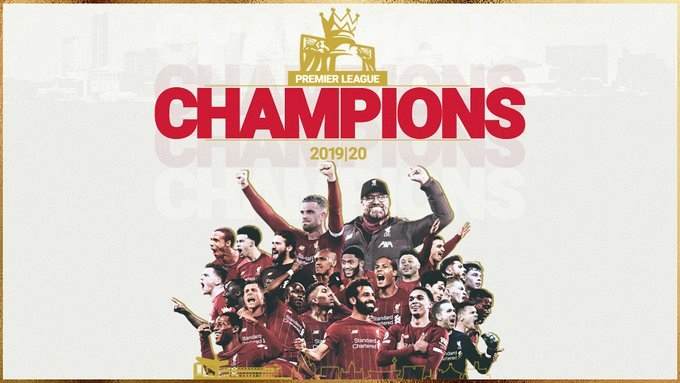 The wait is officially over for Liverpool F.C. who have finally ended a 30-year drought, claiming their first top-flight league title since 1990. They can now be officially crowned Premier League Champions following Man City’s 2-1 defeat to Chelsea tonight.

Putting Crystal Palace to the sword on Wednesday with a 4-0 victory, Liverpool were left just two points shy of clinching the title over their next seven games.

Manchester City is placed second in the league table with a 23 point deficit as an outcome of the result at Stamford Bridge. Liverpool are now officially out of reach and can rest easy, knowing their long-awaited silverware has been secured.

Jurgen Klopp’s class of 2020 have broken the 30-year dead-lock which stretched back to Kenny Dalglish’s 1990 side who won the then Football League Championship. Liverpool fans will welcome this change of fortune, a better reflection on the club’s successful history, now listed with 19 titles to their name, second only to Manchester United with 20.

Reflecting on what has undeniably been a memorable campaign, Liverpool produced a record-equalling run of 18 consecutive wins from October through to February 29th, winning every league-match at home this season with 23 on the bounce. A club record was also set, going 44 matches undefeated, stretching back to last season.

Though the start of the season couldn’t have looked more prosperous, with football being postponed due to the COVID-19 pandemic, Klopp admitted to being fearful of the outcome of the season, with talks of a possible cancellation altogether. All these worries, however, were put to bed, as project-restart took full effect and the league returned behind closed doors. Liverpool put their heads down and produced a 0-0 draw to Merseyside rivals Everton and swept aside Palace to cross the finish line once and for all.

Two of the talismans at the helm of Liverpool’s success were none other than Mohammed Salah and Sadio Mane who contributed a 17 and 15 league goal haul respectively. Full backs Trent Alexander-Arnold and Andrew Robertson chalked up 20-assists to their names, providing fantastic service for their front three of Salah, Mane and Firmino, who had 21 assists to his name in turn.

A season built on the back of a dominant beginning, fans will have to hold tight on their celebrations as we continue to watch the Premier League play out behind closed doors.

Klopp becomes the first manager in Premier League history to win the league and Champions League in his first four years at a club.