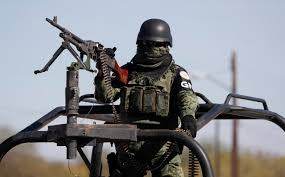 The assailants had grenades and a 50-caliber sniper rifle in their arsenal. Three people were killed in the attack: two bodyguards and a female bystander.

Around 12 people were arrested following the assault. This is the second high-profile attack this month after a federal judge and his wife were assassinated at their home.

When asked if those reponsible had isndie knowledge of Mr Harfuch's route that day, Mexico’s security minister, Alfonso Durazo Montaño said there is no indication that this is the case.

Organised crime expert Vanda Felbab-Brown said: "This is a dramatic breach of what would be considered one of the most guarded, safest zones of the city.

“It’s a massive tactical lapse to allow a government official of this importance to end up with three bullets in him.”

Despite a number of kidnappings and murders in Mexico City in recent years, the country's capital remains a safer place to live compared to other town's and cities.