Get Involved In The Blockstar UK Open Mic Competition! 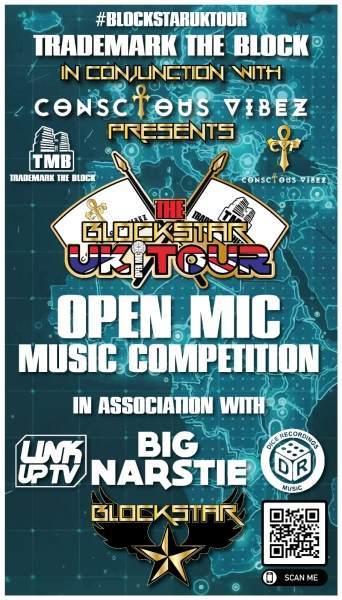 The Blockstar UK Open Mic Tour, in association with Link Up TV, is an all genres open mic competition that spans the whole of the UK. The competition is set over 3 stages with the UK being split up into 4 districts: North, East, South & West.

Stage 1 is the Social Media Round. Contestants send a 30-60 second clip of them spitting or singing on a beat to @trademarktheblock along with their £10 entry fee. The 4 contestants from each zone with the most combined likes using Instagram and Facebook will go through to the Live Semi-Finals.

Stage 2 is the Live Semi-Finals. The 4 contestants will perform live in front of 3 celebrity judges who have influence in the music and media industry. Judges include Grizzy 150, Benny Banks and Big Narstie. The winner by judges selection will go through to the finals.

Four winners from Stage 2, one from each area, will go head to head performing 2-3 live tracks at the main battle in London, April 25, 2020. One winner will be picked by judges decision to win BLOCKSTAR© UK Open Mic Tour.

The winner of the Blockstar UK Open Mic Tour will win an all expenses paid trip to Tenerife, in July 2020, to perform at the main event at Loud In Da Reef 2020. The winner will also get to write, record and produce their own track which will be released via us at Link Up TV, and will also be offered a record deal by one of Blockstar UK's partners.