HomeNewsAustrian Grand Prix: 14 drivers take the knee in a stand to 'End Racism'

Austrian Grand Prix: 14 drivers take the knee in a stand to 'End Racism' 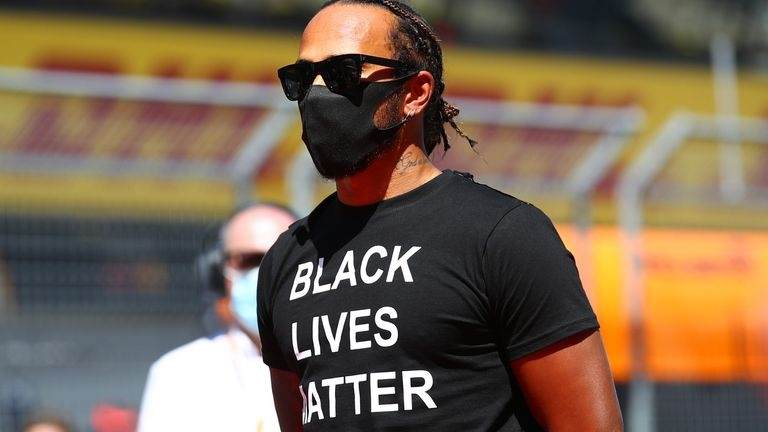 The return of Formula 1 saw a race charged with excitement, a cutthroat edge adopted by drivers amidst a chaotic series of events. The Austrian Grand Prix kick-started the eagerly anticipated season with a bang providing riveting battles throughout the roster.

Mercedes were met with a blow less than an hour before the start of the race, stewards ruling that Lewis Hamilton had failed to slow under yellow flags during qualifying causing him to drop from 2nd to 5th starting position.

The Austrian sun cast down over a characteristically hectic starting line at the Red Bull Ring where the words ‘End Racism’ could be seen posted all around the 20-man grid. Drivers wore black t-shirts with the words written across their chest. Hamilton, who wore 'Black Lives Matter' across his, led the kneeling at the start line before the beginning of the race. The Mercedes cars painted black in solidarity in the background.

One cause. One commitment.

As individuals, we choose our own way to support the cause. As a group of drivers and a wider F1 family, we are united in its goal.#WeRaceAsOne pic.twitter.com/qjxYi1zWcJ

Hamilton, Formula 1’s first and only-ever black driver has strived to be a figure-head for his sport and has insisted that silence is complicit with racism, imploring his peers to take a stand.

Though all 20 drivers could be seen at the start line, the likes of Charles Leclerc, Carlos Sainz, Max Verstappen, Kimi Raikkonen, Daniil Kvyat and Antonio Giovinazzi refused to take a knee.

On reflection upon the BLM movement, Hamilton had said: "I see those of you who are staying silent - not a sign from anybody in my industry, which of course is a white-dominated sport. I'm one of the only people of colour yet I stand-alone”.

"I would have thought by now you would see why this happens and say something about it but you can't stand alongside us. Just know I know who you are and I see you”.

Ferrari's Charles Leclerc commented on the fact that he would not take a knee, stating: "All 20 drivers stand united with their teams against racism and prejudice, at the same time embracing the principles of diversity, equality and inclusion”.

"I believe that what matters are facts and behaviours in our daily life rather than formal gestures that could be seen as controversial in some countries”.

The Mercedes duo was comfortably out of contention for the better part of 71 laps, Hamilton benefitting from brilliant manoeuvring to overtake 3rd and 4th place. However, with 10 laps to go a defining turn in fortune saw Alexander Albon almost overtake Hamilton on the outside of a sharp turn. Lewis, characteristically belligerent held-strong but was deemed to have not given-way, not leaving a car's width between the two. Tyres touching Albon was forced to spin off course, Hamilton incurring another 5-second penalty causing him to place 4th despite unofficially finishing the race second.

Bottas continued unchecked and went on to celebrate the first win of the 2020 season with LeClerc awarded 2nd place and an unlikely Lando Norris, McLaren's young Britain finishing on pole for the very first time.