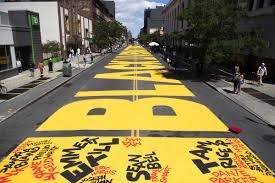 Famous faces rocked up to put in a bit of elbow grease, including Mayor de Blasio and Civil Rights Leader Rev. Al Sharpton.

Bill de Blasio said: "Who built this city, who built this nation, and never got the acknowledgement, the recognition..."

“We are acknowledging the truth in ourselves and in America. By saying 'Black lives matter' we are righting a wrong."

Trump was not in support of the plan after it was announced earlier this month.

He called the words "Black Lives Matter" a "symbol of hate" and suggested that police officers could/should block the work.

He said: "Maybe our GREAT Police, who have been neutralized and scorned by a mayor who hates & disrespects them, won't let this symbol of hate be affixed to New York's greatest street. Spend this money fighting crime instead!"