HomeNewsWycombe Wanderers secure promotion to the Championship, Akinfenwa celebrates in style with Klopp

Wycombe Wanderers secure promotion to the Championship, Akinfenwa celebrates in style with Klopp 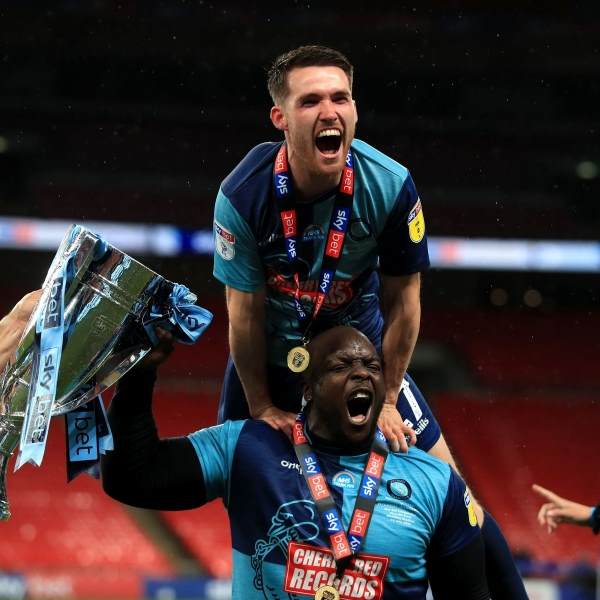 Wycombe Wanderers have secured promotion to the Championship for the first time in their history, beating Oxford United 2-1 at Wembley last night.

The first half began in a tight exchange. Wycombe awarded a corner, Joe Jacobsen found Anthony Stewart at the far post who managed to head the ball down over a questionable keeper effort, the ball deflecting off of Eastwood to put his side ahead (9’).

Oxford United came good in the second half, Mark Sykes with a casual canter down the right side put in a half shot, half cross effort which dipped into the left-hand corner to level the score.

However, they would not be able to make good of a promising spell, James Henry on the end of a clean through-ball, unmarked and untroubled, elected to try to find Taylor rather than shoot himself, the ball sliding across the face of the goal (57’).

A good header by Dickie for Oxford angled for the bottom left corner was matched by a dynamic save from Allsop before Onyedinma at the other end made a run into the penalty area and was clattered by Simon Eastwood (77’). A penalty awarded to the Wanderers, Jacobson placed the ball down the middle to make it 2-1 and secure victory for his side (79’).

An incredible feat achieved by the Buckinghamshire club who last season finished in the bottom-six of League One, Gareth Ainsworth’s Chairboys triumphing to make history.

The fan favourite and formidably physical Adebayo Akinfenwa made good of his determination to prove he still possesses the ability to be impactful in the professional game at 38.

Coming on as a substitute in the 62nd minute for Alex Samuel, he continues to climb the ranks of English football. After scoring a penalty in 2016 League Two play-off against Plymouth Argyle for Wimbledon he jovially expressed: "I think I'm technically unemployed, so any managers hit me up on the WhatsApp and get me a job”.

Speaking once again in a brilliantly energetic pitch-side interview the long time Liverpool fan jokingly exclaimed: "Let me tell you something, the only person that can hit me up on WhatsApp this time is Klopp, so we can celebrate together. You get me?!"

His wish was answered later that night, Jurgen Klopp taking time to deliver a heartfelt video message over Whatsapp in which he congratulated Adebayo on his and his team’s success; "Even in these strange times, I hope you celebrate appropriately”.

Are u crazyyyyyyy the man, the myth, the legend sent me a Watsapp. Today can’t get any better. Thank you Klopp #YNWA #Beast20 #BeastMode we did it #champHereWeCome 💪🏿🙏🏿💙 pic.twitter.com/9RgiKZkYt2

All in all, not a bad result for the Liverpool fan who celebrated their Premier League title win by sporting an LFC shirt to Wycombe training, for which he was subsequently fined for.

Though Akinfenwa had said: “The gaffer told me he would halve my fine if we got promoted, but I’d be so happy if we went up, I’ll still gladly pay the full amount. It would be money well spent”.