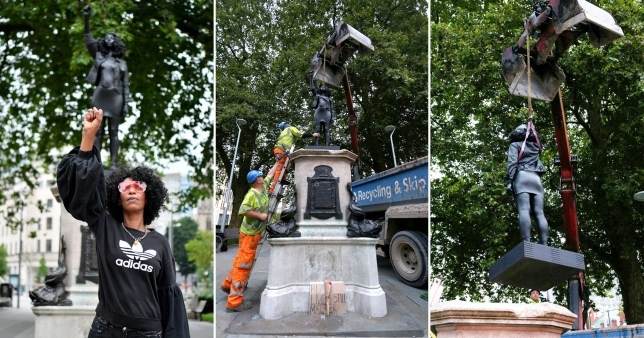 The Black Lives Matter statue portrayed by protester Jen Reid and created by artist Marc Quinn entitled ‘A Surge of Power’ has unfortunately been removed by Bristol Council.

It was allegedly put on the plinth without the permission of the local council and now they’ve taken authority to remove it from the place where previous slave owner Edward Colston stood.

A spokesperson said, “It will be held at our museum for the artist to collect or donate to our collection.”

Bristol mayor Marvin Rees said that the statue had been ‘put up without permission’ but understands that ‘people want expression’ in the community and city. He went on to say: “Anything put on the plinth outside of the process we’ve put in place will have to be removed.”

In the following statement, Mayor Rees stated that decisions for what will be on the plinth will be a contribution from the entire city.

Rees statement read: "The sculpture that has been installed today was the work and decision of a London based artist. It was not requested and permission was not given for it to be installed.”

"We have set out a process to manage our journey. We have established a history commission which will help us tell our full city history.”

"As we learn this fuller history including the part played by Black people, women, the working class, trade unions, and children among others, we will be in a better position to understand who we are, how we got here and who we wish to honour.”

"Crucial to our heritage has been the harbour and the docks, manufacturing and industry, research and innovation, transport, slum clearances, housing, modern gentrification and faith.”

"As the commission shares this information, the city will decide on city memorials and the future of the plinth.”

The statue of Reid with her fist in the air was captured by Quinn from her actions during The Black Lives Matter protest. After the protest, Reid told BBC News: "When I was stood there on the plinth, and raised my arm in a Black Power salute, it was totally spontaneous.”

"I didn't even think about it. It was like an electrical charge of power was running through me. This sculpture is about making a stand for my mother, for my daughter, for black people like me.”

Quinn stated, "Jen created the sculpture when she stood on the plinth and raised her arm in the air. Now we're crystallising it.”

A moment can last a lifetime, no matter how much history can be removed.