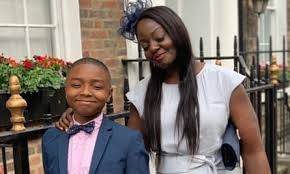 The Met's most senior firearms officer says he is "content" with how his officers behaved when bringing down 12-year-old Kay Agyepong. Kay’s North London home was raided on 17 July after a passer-by saw a "black male holding a firearm on the sofa".

Kai Agyepong was detained while officers searched the entire home, and was released when a plastic pellet gun was found. Commander Kyle Gordon said the officers were "professional" throughout.

After receiving the call, a Met Armed Response Vehicle was sent to make inquiries.

Kay’s mum Mina Agyepong, 42, said her son was arrested when he opened the door, and that about 10 police officers were "aiming their rifles at me and my girls and shouting for us to put our hands up".

She added: "I saw there were red dots on my daughters' heads and I started to get really scared. I honestly believed if the officers got alarmed in anyway, they would shoot."

The Met has referred itself to the Independent Office for Police Conduct (IOPC) and Ms Agyepong is also pursuing a complaint against the force.

In a blog post, the family's solicitor Iain Gould said the force had "major questions" to answer.

"Deadly force could so easily and tragically have been unleashed upon (Ms Agyepong) and her children," he said.

Nines unleashes clean visuals to his...

Wiley has been banned from TikTok

UK officially enters recession for the first time in 11 years!

Wiley has been banned from TikTok

Mauritius under state of emergency