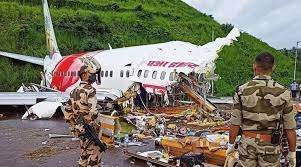 A plane carrying 190 people, including six children, has crashed at an airport in India, killing at least 18 people and seriously wounding 156, officials say.

The Air India Express plane - which was repatriating people stranded by the pandemic - was en route from Dubai and crashed in the southern state of Kerala.

Prime Minister Narendra Modi said he was "pained by the plane accident".

The plane crashed at 1940 local time on Friday, as it attempted to land for a second time at Calicut International Airport. The first attempt was aborted by the pilots because of the heavy monsoon-season rainfall lashing Kerala.

In a tweet India's Civil Aviation Minister, Hardeep Singh Puri said that the aircraft "overshot the runway in rainy conditions", then nose-dived down a 35ft slope, before breaking in two.

The director general of India's National Disaster Response Force, S N Pradhan, said Calicut airport had a "table-top runway" and that the aircraft plummeted into "a ditch" after skidding across it.

He said the impact with the bottom of the ditch caused the fuselage to break in two, and that the front half was "very badly mangled and damaged".