HomeNewsMauritius under state of emergency

Mauritius under state of emergency 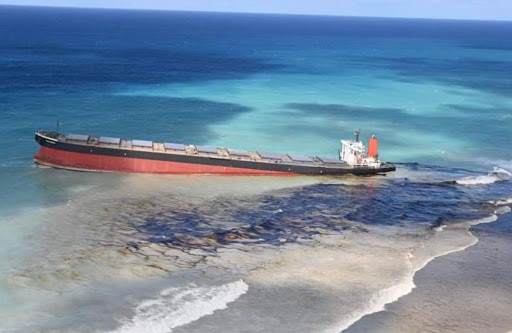 Late Friday the island that sits in the Indian Ocean, Mauritius has declared a state of emergency due to an oil spill. A Japanese-owned ship that sat in the shallow water of the island from July 25 began spilling tons of fuel. According to The New York Times, the Japanese Ship carried nearly 4,000 tons of fuel oil and 200 tons of diesel on board.

Prime Minister Pravind Jugnauth declared a state of environmental emergency on Friday. Jugnauth tweeted: "Our country does not have the skills and expertise to refloat stranded ships, so I asked for help from France," tagging French President Emmanuel Macron.

Greenpeace state this incident will cause devastating consequences. The "MV Wakashio ran aground around July 25th and is now leaking tons of diesel and oil into the ocean," said Happy Khambule, Greenpeace Africa climate and energy campaign manager.

"Thousands of species around the pristine lagoons of Blue Bay, Pointe d'Esny and Mahebourg are at risk of drowning in a sea of pollution, with dire consequences for Mauritius' economy, food security and health.” He went on to say all 20 crew members were safe

Deborah de Chazal, executive director of the Mauritian Wildlife Foundation, stated "Booms have been installed to collect the oil near the wreck and others to protect some key sites including Blue Bay Marine Park," she said. "Help and equipment are being brought in from abroad as Mauritius has limited equipment in the country to address the oil spill. I understand there are discussions to see if the remaining oil can be pumped from the wreck."

The island nation's Ministry of Environment said in a statement they will investigate this matter. The ministry warned the public to stay away from the affected area due to the toxic fumes.