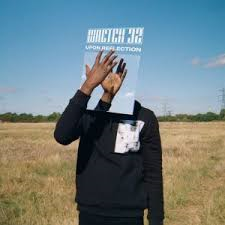 Yes, people the rumour on the road is true, the new Wretch 32 album has dropped today. It came as a surprise when lyrical veteran Wretch 32 posted an Instagram picture of the album artwork on October 17 with a caption which read “My fifth studio album drops tonight at midnight”. As you can imagine social media went wild with fans and fellow UK artists posting the picture of the album artwork on their pages and Instagram stories. As promised at midnight we received the album.

In order to deliver a justifiable album review, I believe you have to live with the music for a while or at least give the album at least three good intensives listens. Come on it's Wretch, you can’t get everything in one go. Every time you listen to a Wretch record you always manage to hear something new which you probably missed during the first listen; that’s what makes Wretch a phenomenal creative.

So here we go let’s run through the album. Track one titled Winning kicks off with a balanced feeling, the instrumentation treads the fine balance of being bouncy and sentimental. Wretch talks about embracing his change and talks about winning, which I believe to be true. He has spent over a decade in the game with his first solo album dropping back in 2011. He talks about being a leader and being obliged to lead the youth to the promise land. His wordplay is on a 100 as per usual. During the second listen of the album I caught a witty line he said which was “household name, I’m a fridge”. Definitely a good introduction to the album. The end of Winning transitions into his second track mummy’s boy with a skit of a Jamaican man gunning for him.

Mummy’s boy is a core Wretch tune, or should I say, signature Wretch. Introspective, knowledgeable with a beautiful meaning. I related to this track and believe many people will be able to relate to this tune. It's beautiful to see an artist champion mothers and women. The production is put together very well, it has sentimental instruments like the saxophone and piano. Wretch navigates this track well, I personally like the positions of the bridge and the transitions of flow. The arrangement structure is fitting and makes sense. There are parts of the track which are filled with lots of instrumentation and other parts of the track have fewer instruments. Shout out S.O.S on production, good job guys.

As we move onto track 3 the listener witnesses an evolution of Wretch 32. On this record, he sings throughout the whole song. It has a reggae/dancehall feel. It’s different from what you would expect from Wretch but it’s not shocking, as artists are always growing. The melody is also catchy, and you don’t just listen to the song and enjoy it, you feel it. I couldn’t necessarily figure out who he is talking about or talking too, but it is definitely to do with love. It’s a thumbs up for me, but not necessarily my favourite on the album.

Track 4 starts off with a skippy chorus from Wretch. This tune is for the mandem, I can see this song being pumped loud in a car during a late-night cruise. It’s a trappy sort of vibe and Wretch navigates it with a different flow, it's not copied but it holds elements of what’s in trend. A good use of alliteration is shown during the hook. The second verse is handled well by the landlord Giggs who matches the style of Wretch’s flow. At the end of the track Wretch switches up the flow and ends the track with the line “I never had a pot to pee in”. Good track.

Track 5 sees the entrance of Ghetts and Talay Riley. I loved the hook on the track, it's catchy. He reflects on his success and where he came from. Hailing from Tottenham his road was not easy to navigate. He narrates “Dear diary my brother tried to kill me today, dear diary I pray you to keep restoring my faith”. Again, Wretch starts with a slow flow but switches the flow halfway through his verse by speeding it up. The second verse we are introduced to Ghetto Gospel, if you know you know. Ghetts talks about his come up and radiates gratitude for his career. Personally, this is my favourite song on the album, I love the message, structure, and flow of the track. The chorus is also catchy. Talay Riley blesses the track with adlibs and helps direct the outro.

Insurance is track 6 on the album, the production sounds like something Drake would rap on. It is produced by 169 who has a few accolades to his name in terms of people he has worked within the U.K music scene. On this track, we are introduced to the ego of Wretch 32. He talks up and boasts on this track saying, “I got 40 racks up my sleeve”. Wordplay is on point, I like the use of metaphors on this track, personally, I prefer metaphors to similes as metaphors require more effort and only true lyricist can pull that off effortlessly.

I also commend the structure of the album, the arrangement of the tracks come across strategic. After every emotional/intense track there seems to be a lighthearted song after which gives you time to digest and recoup energy for the next track. After Insurance, we dive into a deep record labelled Upon Reflection, which is the name of the album. He talks about women he has been with and also touches on his issue with Chip which has been lingering on his mind. He reflects on life and family members who never believed in him. He really goes in on this record, here we see a vulnerable Wretch who lets his emotions spill. It's one of my favourite records on the album.

Again, straight after an intense record its time to have fun with Spin Around. This tune is a vibe. It's one of those records you pre-drink too. Big tune, its funny how Wretch always finds a way to place metaphors in every single track. It's amazing to witness and hear. Chorus is smooth and the beat compliments the melodic delivery of Wretch so well. More records like this please, Wretch. All across the album he has infused the new trend of music with his style and given birth to good records.

Now we dive into another deep record, what did I tell you about the arrangement? The next track is titled Closer To Me, and it’s for the ladies. He raps a sentimental graphical verse with a lot of descriptive language. Wretch tackles the chorus with a melodic vocal tone saying, “come closer to me”. It reminds me of a make-up song to be fair. The production did not capture me, but the lyrics caught my attention.

Track 10 is titled Last Night. Wretch has evolved and he is singing a lot more on his songs. Again, wordplay is sick, another song for the ladies. The track brings an element of nostalgia to me, if you remember his record on FR32 called His & Hers Perspective, that’s the energy this track brings me. Something similar but slightly different. The instrumentation is musical and constructed well. The guitar is life.

We are almost at the end of the album; it has been a roller coaster of well thought out different vibes. Track 11 is a vibe which features Burna Boy. Burna Boy kills the Chorus with adlibs from Wretch 32. It’s a naughty one from the veteran as he sings “Push it all in” (ha-ha). It’s a fun record, I hope it makes it to the clubs.

The last track of the album, The Baton, is a combination of old flame, young fire accompanied by the one we call Knucks. Avelino goes hard as he sets the pace on the record with delivery, flow, punchlines. Knucks kills the hook: “They ain’t ready for the war”. Wretch appears in the second verse where he talks about his fans only knowing his glory and not his story. He talks about taking it easy from now on and he is passing the baton. Personally, I don’t think he should pass the baton, I believe he should keep coming harder and harder.

All in all, the album is a fruitful listen encompassing different styles. It shows growth in Wretch’s artistry and the fusion of the new trends with his current style. Definetely give the album a listen and I hope you enjoy!