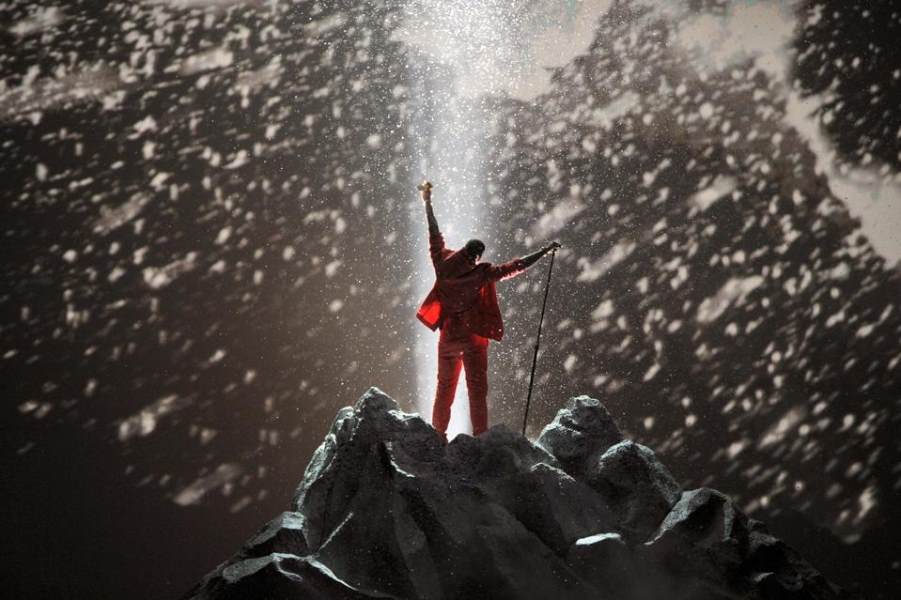 Dare I say album of the decade?

Success is an incredibly hard thing to maintain, especially in the music business. To hit it out of the park on a consistent basis proves a difficult feat all on its own, and Kanye really isn’t given enough credit for altering and progressing the scene single-handedly every few years. In recent times some projects have landed to a greater reception than others of course, but at this moment in his career Ye had a trilogy of instant classics under his belt, and after experiencing mind splitting tragedy was still able to create an album responsible for the eventual sound of today’s Travis Scott’s and Kid Cudi’s. If you’d like to recap ‘The College Dropout’, ‘Late Registration’, ‘Graduation’ or ‘808’s & Heartbreak’ before we progress please do so now. From here on out we explore greatness. The journey of an artist arriving full steam ahead at the peak of their power. Kanye’s twisted fantasy begins here.

Kanye had explored his darkest feelings and sorrow throughout the tracklisting of 808’s, but it’s clear he was still yet to recover from the immense loss and guilt triggered by the death of his mother. Looking at Ye, the pictured painted was of a man forever changed. What was once his signature ear to ear smile seemed a relic of the past, and the bright spark behind his eyes had begun to flicker and fade. West’s focus throughout times both good and bad has always been music, and as he blazed forward into an unfamiliar and lonely world he once again sought solace in the studio. This isn’t to say his emotion didn’t project in other ways however, and here we arrive at the now infamous VMA’s moment.

A young country starlet who goes by the name of Taylor arrives on stage to collect her first award for best video. Kanye, makes his way up unannounced, and you know the rest. The moment became one of the most iconic in pop culture, a defining music moment of the decade. For many, this is the moment when the support of Kanye became untenable, with even Obama recorded publicly labelling him a ‘jackass’. This isn’t to say Ye was lacking fans by any means, but I identify this event as the catalyst for his tainted image in the eye of the masses. Rather than observing a man on the brink of collapse after experiencing intense mental strain, the media labelled him a villain. Something they’ve reinforced right up until now. He needed help, not ridicule, and we forget how easy it is for one to lose their way under the glare of the spotlight. We now have so many examples of the negative effects of public backlash, and the insurmountable wave of criticism surrounding Kanye must have been deafening, to say the least. He should be held accountable for his actions of course, but a little understanding and reason never hurt anybody right? What followed for the creative genius was self-imposed exile. Ye retreated to the tranquil settings of Hawaii, with reports claiming he had stepped away from music entirely for the foreseeable future. Many wondered whether the Louis Vuitton Don would ever reclaim his spot in the limelight and enjoy commercial success again, and that’s when it arrived. ‘My Beautiful Dark Twisted Fantasy’.

In essence, Kanye West opened the decade with a project widely accepted by both critics and fans alike as his magnum opus. The album is a cornerstone of Hip-Hop that would victoriously stake his claim as the most prominent icon of the year, whilst simultaneously putting the glorification of celebrity on blast. This juxtaposition runs throughout the tracklist and is one of the qualities that makes it such a masterpiece. I feel a sense of sorry not sorry at play here. Rather than apologizing for the polarizing behaviour, he had come notorious for, in order to make amends with his critics, Ye embraces his divisive persona. He relays his message through melody, symbolism and absolutely phenomenal production to devastating effect. The sheer scale of this album is beyond gargantuan, packed to the brim with features and lavish groundbreaking beats.

The album's header ‘Dark Fantasy’ serves as the perfect introduction to the experience, and as the choral voices harmonize in unison we are drawn into this world of media bias, industry injustice and soulless fame. It feels like the track is leading us down the rabbit hole, alluring us with the bright lights so that we ignore the undesirable characters lurking in the shadows. It sounds a lot like Hollywood right? For someone who’s been lucky enough to experience the parties and people of that world, I can tell you the sun-washed boulevards of the hills are a sad place. One where the desperation and incessant need to ‘make it’ can be felt as much as the California heat. ‘All of the Lights’ while proving an immensely catchy and anthemic hit indicates the grand direction of the whole project. You will, of course, know that Rihanna and Kid Cudi feature on the track, but did you know the backing vocals were sung by some of the worlds biggest artists? Yes, that's right, the backing vocals were provided by Elton John, John Legend, Alicia Keys, Drake, Fergie and more all contributed to this creative collaboration, helping match the ambition of it’s creator. This whole album feels huge, it feels legendary. Simply put, it’s both of those things and more. It’s pure art.

‘Monster’ is another song packed with star power and substance. The project was of course intendedly littered with subliminal messages and moral questioning surrounding the trappings of fame, but the replay value of this thing is insane. It includes so many hits, so many tracks perfectly suited for both radio and the collections of genre purists. ‘Monster’ is another one of these as from the iconic Rick Ross introduction to the Jay-z feature, hypnotising chorus to Bon Iver outro we are kept transfixed by its original production and lyrical content. The most impressive factor here though has to be the feature from none other than Nicki Minaj. 10 years ago she remained very much on the come up, no album, no earned place at the table. The fact she was given damn near half of the song to showcase her delivery, differing flows and sheer command on the track is an opportunity unheard of in this industry. Ye’s eye for talent remains unmatched, and here stood mixtape Nicki barring on a track with two legends, Everybody held their own of course, but there was no doubt who the its shining star was.

The album, of course, takes a darker tone throughout its second act, with ‘Runaway’ proving an unabashed self-reflection on Kanye’s character. ‘Blame Game’ and ‘Lost in the World’ differ greatly in sound, but both shed light on his souring relationship with ex Amber Rose. His fledgeling romance with Kim Kardashian is also touched upon however, signalling a brighter future to come. The emotion feels so genuine. It says something about Ye that despite being targeted by the media so consistently he is still able to open up and show vulnerability through music.

‘Power’ is something special, and one of the most profound songs in Ye’s entire discography. It’s an instant classic, but also signifies a shift in his lyrical ability. For his first four studio albums, Kanye wrote his verses on the spot, simply speaking his mind in the booth. That all changed here, with Kanye exaggerating that the song took 5000 hours to write. Considering what we got? I can pretty much believe that. The track samples King Crimsons ‘ 21st-century schizoid man’. The original spoke of the calamities of the Vietnam war, but here it is jarred against Continent Number 6’s 1976 album ‘Afromerica’. This is where the beats famous tribal Esque chants were sourced. The finished instrumental is a clever ensemble of electronic, boom-bap and rock sounds that create a unique harmony. With Ye’s classic bravado soaked lyrics resting on top, everything glues together perfectly. It’s giant in stature, awe-inspiring almost. The song underlines every angle of the ‘power’ that Kanye wields, celebrates, questions and abuses. He himself highlighted his intentions with the track, to show how his childlike wonder and creativity has been polluted by the adult nature of fames dark side. As the bridge fades away the phrase “so excited” shortens to become “suicide”. We can only interpret this as his only perceived escape route from this dark fantasy. A powerful track bursting at the seams with meaning.

Throughout the album, Kanye explores his struggle to maintain a normal life, whilst still demanding to be worshipped like a god. He relishes in the very consumerism that taunts him. He relies on the luxuries that in eventuality hurt him. Ego, decadence and self-doubt are all side effects of the fame that Ye can’t seem to get enough of. Just like the phoenix he rose from the ashes and with this album once again solidified his spot on the throne. 10 years later its effects are still felt indefinitely throughout modern production and song structure, and as we enter a new decade ‘My Beautiful Dark Twisted Fantasy’ remains the most influential and impressive rap album the last produced. I’m not matching it against the project of Kendrick and others, what I’m saying is that this gave birth to infinite ideas in the minds of other creatives. It was a peak for its creator and remains a moment of immense cultural significance.

Annnnd we’re done. But the Ye’s journey doesn’t stop here. What’s next you ask? An album that again switched up the formula, pushing the boundaries of production to new grounds. Join me next week as we revisit ‘Yeezus’.