US police shoot another black man 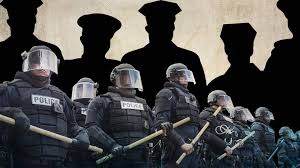 You read it right, and this time it’s in the state of Wisconsin. US police have shot a black man as they responded to what they say was a domestic incident.

The man named Jacob Blake was taken to hospital for surgery and is now in intensive care, having been shot “many times”.

The police are yet to provide details about what led to the shooting, and it is unclear who dialled 911.

The Wisconsin Department of Justice is investigating the incident. It said the officers involved had been placed on administrative leave. Something you don’t hear very often.

In video footage shared on social media, three officers can be seen pointing their guns at a man identified as Jacob Blake as he walks around a parked SUV. As he opens the door and leans into the car, one officer can be seen grabbing his shirt and opening fire.

Seven shots can be heard in the video, as witnesses shout and scream. What worries me about this is that if he’s [Jacob Blake] leaning into a car, it means he was shot in the back.

In a tweet, prominent Civil RIghts lawyer Ben Crump said Mr Blake's three sons were in the car he was getting into as he was shot.

He said: "They saw a cop shoot their father. They will be traumatized forever. We cannot let officers violate their duty to PROTECT us."

He said the shooting happened after Mr Blake tried to break up a fight between two women.

As of Monday morning local time, more than 18,000 people had signed a petition on change.org calling for the officers involved to be charged.

We at Link Up Tv pray that Jacob Blake makes a quick recovery, and our thoughts are with the Blake family.

Check footage of the protest that erupted as a result here: