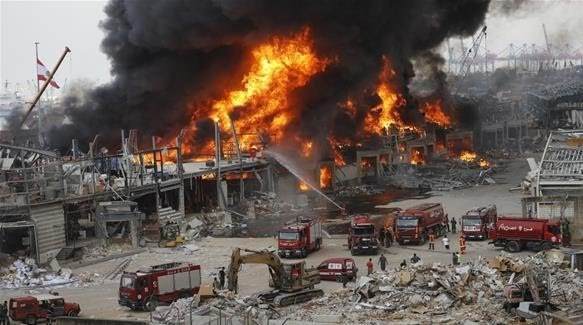 A huge fire has erupted at Beirut port near site of the devastating explosion that left 190 dead and 6,500 injured last month.

Footage shared on social media shows a large column of black smoke covering the area where the fire has erupted, causing a wave of panic across the Lebanese capital.

The source of the blast is not yet known, however it has been confirmed from a military source that oil and tyres caught fire within the duty free zone of the port area.

Footage has shown firefighters trying to douse the fire, near the same location of the Beirut blast in August.

“We don’t own exactly what is burning, we are trying to put out the fire but it is too big, we need a mix of water and foam,” said Michel el-Murr — head of the fire department search and rescue team.

“We have about 100 men here, including the fire department, civil defence and army as well as the helicopters, we are trying to contain the fire,” he added.

There were no injuries, according to head of Lebanon’s Red Cross, George Kettaneh, however, some people were left suffering from shortness of breath.

Raging fire in Beirut’s port right now, causing a wave panic across Beirut one month after the #BeirutBlast ravaged the city. #lebanon pic.twitter.com/5xDs7XBk8i