Get 2 Know Lyco and Wxyne 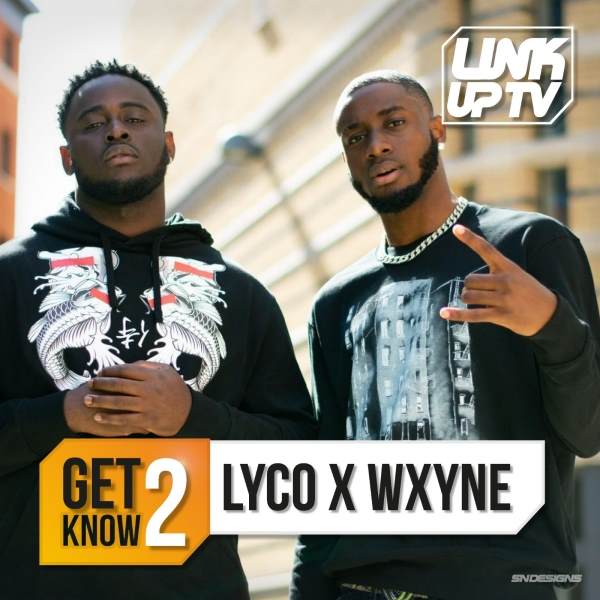 Lyco and Wxyne, both singers hailing from Birmingham joined forces and became a duo after connecting with each other on Instagram. Fusing Afrobeats with melodic choruses and RnB. A few experimental studio sessions and collaborations led to them cementing their sound like a pair.

Rae: What makes two individual artists both initially embarking on solo musical pursuits team up to become a duo?

Lyco: I started making music a year ago, I was doing covers and putting them up on Instagram. I heard a preview to one of Wxyne’ssongs and before I even started making music, I thought that this is the kind of music I want to make. So I dm’dhim and told him what he was doing was cold, we agreed to get in the studio and at first we were just doing collaborations but then the sound just started coming together and synchronized. So we decided that this is something we wanted to push as a duo.

Wxyne: At the start, we didn’t really wanna be a duo, but everything we were making started to make sense. Our voices just blended together and we were making good music so we just wanted to get bigger and better so decided to be a duo. When I first heard Lyco’s songs on Instagram I was like, this guy can really sing…. He used to come to my house every single Wednesday, which was his day off uni and my day off sixthform, so every Wednesday was a new song or a chance to finish other songs.

Rae: If you hadn’t gone down the music route what do you think you would be doing instead?

Wxyne: If I wasn’t doing music it would definitely be athletic, 100-200 metres, I’m at university right now but that’s a backup plan, music is my main plan.

Lyco: It would be academics really, I’ve always been an engineering and maths type of person. I’m in the second year now but if it wasn’t for music, I would definitely be putting my head down more in uni.

Wxyne: Growing up I listened to a range of stuff…. artists like Akon, Michael Jackson, Sean Kingston and Chamillionaire and then I switched and started listening to RnB.

Lyco: Growing up I would listen to Indie, Alternative Rock and Afrobeats, from Wizkid and Maleek Berry to Bastille, there’s something about the chords they used to play.

Rae: You’re managed by Lotto Boyzz manager, do you see yourself following in the same footing or are we going to see something different?

Lyco: I would say we’re very different from Lotto Boyzz, even though we’re in the same managerial environment and we’re in the same circle. Me being Nigerian and Wxyne being Jamaican brings a whole new sphere to this…. And the fact that we’re both singers, it’s something different and fresh.

Wxyne: I feel like mix well because of our differentfrom cultures, Lyco’s picked up a lot from my Caribbean side as well and we learn from each other, I’ve picked up a lot of his Yoruba… even down to the food, we’re learning off each other and putting it in our music.

Rae: As a duo who do you think you will blend well with musically and who would you like to see yourself collab with?

Wxyne: Because I’ve grown up here and we’re from the same city and I’ve learnt a lot from them, I would say Lotto Boyzz number one so it would be nice to do that. A female singer… it has to be Jorja Smith.

Lyco: For me, first Lotto Boyzz as well then someone like Burna Boy and Wizkid… artists that have that umphand that vibe that carries the whole crowd.

Rae: What can we expect to hear from you next?

Lyco: You can expect a lot more music, but at the same time we want to make sure that is music isn’t just about the usual topics like girls or money. Music is something that’s meant to make people do more than feel good, it’s meant to speak to people on a deeper level as well, so we want to do things like that and not just the fun vibey stuff.

Wxyne: I want everyone to know our music when their sad and when their down I want it to bring them joy, I want to inspire people and be a role model. Hopefully, our music can take people from a dark situation and bring them to the light. We have ballads coming out and there as well, but for now, we’re dropping our new single ‘Best Friend’ next week.