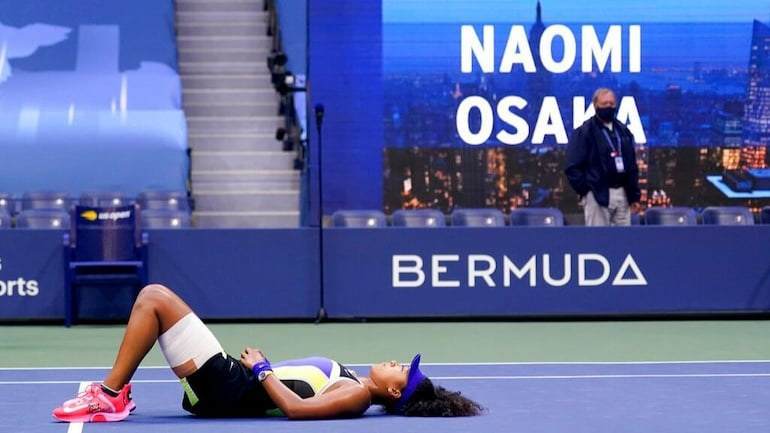 Osaka started slow 3-0 in the second but then won 10 of the next 12 games to increase the momentum. Azarenka, in her first major final since 2013, was stretched for 5-3 in the decider before Osaka served out. Osaka full of joy as she took her second match point, then lay on the court overwhelmed with achieving championship status once again. Azarenka was unable to maintain the intensity in the later and subsequently meeting defeat.

Osaka, humbled in victory said, "I don't want to play you in any more finals, I didn't really enjoy that, it was a really tough match for me,” she went on to say: "It was really inspiring for me because I used to watch you play here when I was younger. I learned a lot, so thank you.”

An empty Arthur Ashe Stadium due to coronavirus pandemic saw Osaka enjoy the moment full of emotion as she lifted the trophy from the table herself rather than be presented with it because of social distancing rules.

Osaka clearly was frustrated and lost for direction in the early rounds as she threw her racquet to the floor in disgust. The champion mindset and mental resilience which she says she has developed over recent months came to the forefront. "I just thought it would be embarrassing to lose this under an hour."

Osaka has also been fighting off the court in activism in the fight against racism and police brutality in the United States. Osaka pulled out of her Western and Southern Open semi-final in protest at the shooting of Jacob Blake, a black man, by police in Wisconsin. Before her US Open first-round match, she wore a face mask with the name of Breonna Taylor, a black woman who was shot dead by a policeman in March. Naomi Osaka, who has Japanese and Haitian parents and was brought up in the United States, said she had seven masks with different names.

Her intention is to reveal all of them by reaching Saturday's final and that provided her with fuel for motivation to win the championship. "I felt the point was to make people start talking," Osaka said after her win. ”I've been inside the bubble and not sure what's going on in the outside world. The more retweets it gets, the more people talk about it."