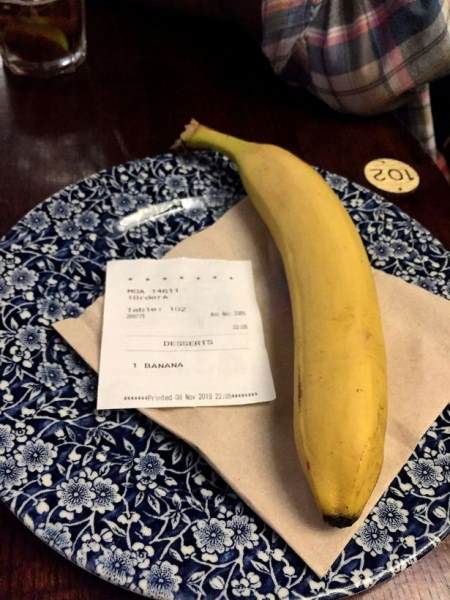 Kincella ordered the 30p banana on the Wetherspoons’ app with the receipt stating “dessert”, however the victim insisted neither he nor his friend had ordered it.

Speaking after the incident, Mr D’arcy-Smith said: "We both looked at each other then looked at the banana. It clicked that it wasn't ours. It was clearly sent by someone who was trying to be racist."

Mr D’arcy-Smith, a media and marketing executive said he felt “highly humiliated” and felt it was a racist act. He says he is now traumatised and will never return to that pub, and that he is disappointed Kincella never apologised to him.

Mr D'arcy-Smith said: "One of the things I hope comes from this is he does learn from this and realises what he did was wrong."

When Kincella was eventually nabbed at his home on January 17 this year he said it was “a joke”. Ha.

Kincella, of Mottingham, South was found guilty of a racially aggravated offence under the Public Order Act when he appeared at Bexley Magistrates' Court.