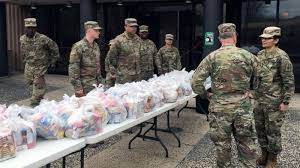 ‘Our boys’ have been used throughout the crisis - such as at testing centres - but now they may play a more pivotal role in our war against the virus.

According to Prime Minister Boris Johnson, the government won’t hesitate to use the army to ease the burden on the police in enforcing the Covid rules.

BoJo added that the government will also make more resources available to the police to help enforce the rules. It’s worth noting at this point that he’s made promises similar to this on numerous occasions in the past, and has at times failed to deliver them.

He said: "We will provide the police and local authorities with the extra funding they need, a greater police presence on our streets.

"And the option to draw on military support where required to free up the police."

This announcement comes just after Boris revealed a trade of new measures to help combat Covid-19, that could last “perhaps six months.”

Some of these measures include: