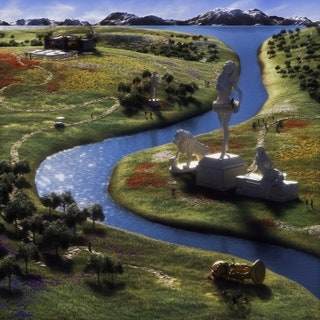 Over the years New York has been the melting pot for musical talent and it has played home to some legends of the rap game. If you don't believe us, then take a look at the talent to come up from the Big Apple in the last few decades. Hip Hop giants such as The Notorious B.I.G, Jay Z, Tupac, Nas, and 50 Cent have all cut their teeth in NYC. They have all been responsible for releasing some of Hip Hop's greatest ever productions and each one has changed the game in their own way.

Let us fast forward to September 2020, where the New York rap scene is a completely different landscape. It's currently being dominated by rainbow-haired snitches that possess no talent whatsoever. I mean I'm not naming any name here, but I would like to insert one of my favourite ever Drake bars below.

Beyond all the fake rappers and clout, you will find that the New York rap scene is in a very healthy position. It's dominated by Brooklyn's drill movement that was epitomised by the late great Pop Smoke. The Woo was a driving force behind New York rap, and he will act as an everlasting inspiration for music artists all around the world. In recent years, an influx of teenage talent has found their way onto the New York streets. From Queens to Harlem, you will find a rap teen who thinks they harness the power to make a defining statement in the world of music and who would dare argue with them?

One of these artists is 18-year-old Lil Tecca, who announced his arrival last year with the massive hit 'Ransom' which blew up stateside and pretty much all over the world. He followed this with his debut Ep 'We Love You Tecca' which gifted us tracks like 'Amigo' and 'Molly Girl'.

Lil Tecca made a big statement with this release and presented us with further evidence for just how much talent he possesses. The album bolsters 19 songs which showcase Tecca’s strong vocals and uncanny ability to provide one hell of a catchy chorus. Start making your way through ‘Virgo World’ and you’ll find some of rap’s hottest names lending their voices for a feature including Polo G, Lil Durk, Nav, and Lil Uzi Vert.

No Cap, Lil Tecca has major talent, and at just 18 years old the world is his oyster and the next few years could potentially be massive for the New York rapper. ‘Virgo World’ is a great sophomore album that you’ll find yourself fascinated with. The production across all the tracks is smooth and crisp with each one a very worthy listen, this album has great variety, and hit songs can be found from start to finish.

Here are the Five of the best tracks from ‘Virgo World’ below.

So, it’s not the type of song John Cena would make an entrance to but if Lil Tecca ever makes it into WWE’s Royal Rumble then at least he will have a song tucked away in his locker. ‘Royal Rumble’ is the staple song of ‘Virgo World’ t personifies Tecca’s energy and makes light work of the funky beat.

This one caught me by surprise with its show-stopping beat that blends perfectly with the voices of Lil Tecca and Lil Uzi Vert. This track is a complete vibe, and it's easy in the top 3 on 'Virgo World'.

I don't know how Twecca did at science in high school, but he is getting an A-plus for his effort in 'Chemistry'. This mellow sounding track comes through with an infectious upbeat chorus that merges well with the New York rapper's tone.

When You Down ft Polo G & Lil Durk

What do you get when you add Lil Tecca with two of the hottest stars in the rap scene? That’s right, you get ‘When You Down’ This is a powerful combination that has some epic deliveries from both Polo G and Lil Durk.

Lil Tecca X Nav - The collab of the whole album.

This one was a real curveball that pits both artists together for the first time in their careers, and the end result is a track called ‘foreign’ that will send you on a trip to the realms of good beats and good bars. It’s no surprise that this track is one of the hottest on ‘Virgo World’ the addition of Nav is bound to turn a song into straight fire. Tecca and Nav intertwine their stylings on ‘Foreign’ and make one of the best tracks on the whole joint.

Check out ‘Virgo World’ and let us know if you’re feeling the vibe.