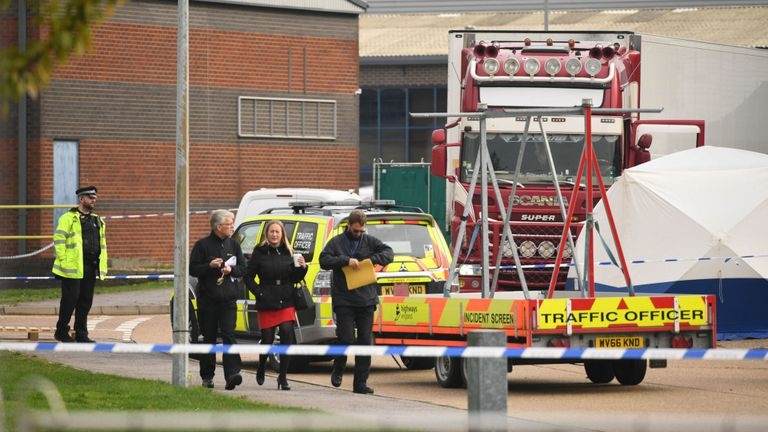 The deceased bodies of 39 individuals have been found in a lorry in Essex.

The lorry, which has been confirmed to be registered in Bulgaria, was found att approximately 01.40 BST at Waterglade Industrial Park in Gray according to police.

Everyone inside the container, consisting of 38 adults and one teenager, died, said Essex police.

The driver of the shipping container is a 25-year-old man by the name of Mo Robinson, from Portadown in County Armagh, has been arrested on suspicion of murder.

Police officers say they believe the vehicle travelled from Zeebrugge, Belgium, into Purfleet, Essex, on the River Thames before docking in the Thurrock area shortly after 12.30am this morning.

CCTV footage has emerged of the lorry driving towards an Essex industrial estate minutes before the bodies were found. The footage was captured at 1.10am and the police were called at 1.40am.

Chief executive of the Road Haulage Association, Richard Burnett, said that the shipping container appeared to be a refrigerated unit with temperatures possibly as low as -25C. He described the conditions for anyone inside as "absolutely horrendous".

Deputy Chief Constable Pippa Mills, of Essex Police, said identifying the victims remained a "number one priority", but was expected to be a "lengthy process".