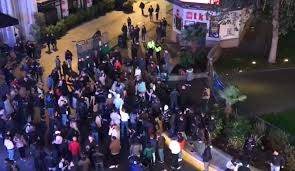 In a video doing the rounds on social media, crowds can be seen stumbling around the central London hotspot last night, after pubs and restaurants closed.

With what appears to be a complete disregard for the pandemic, people are seen dancing, singing, and hugging each other.

The video was shared on Twitter with the caption: "Crowds try to socially distance then give up as they gather to listen and dance to the drummer busker banging out some tunes in #LeicesterSquare .... boos as police shut it down due to #coronavirus restrictions #socialdistancing.”

Some viewers were fuming, with one saying: "And this ladies n gentlemen is why the shiz will get tougher and restrictions harsher, because the only thing worse than COVIDIOTS is drunk COVIDIOTS."

This comes after Sadiq Khan said tightening the rules in London is "inevitable" alongside the expected announcement of Boris Johnson’s new three-tiered system that is due from the government next week.

Mr Khan added that he thinks London restrictions should not be borough-by-borough and should be London-wide because "it's the most effective way to reduce the spread of this virus".

He said: "My prediction is there will be more restrictions being brought in because we don't want to see in October and November what we saw in March and April."