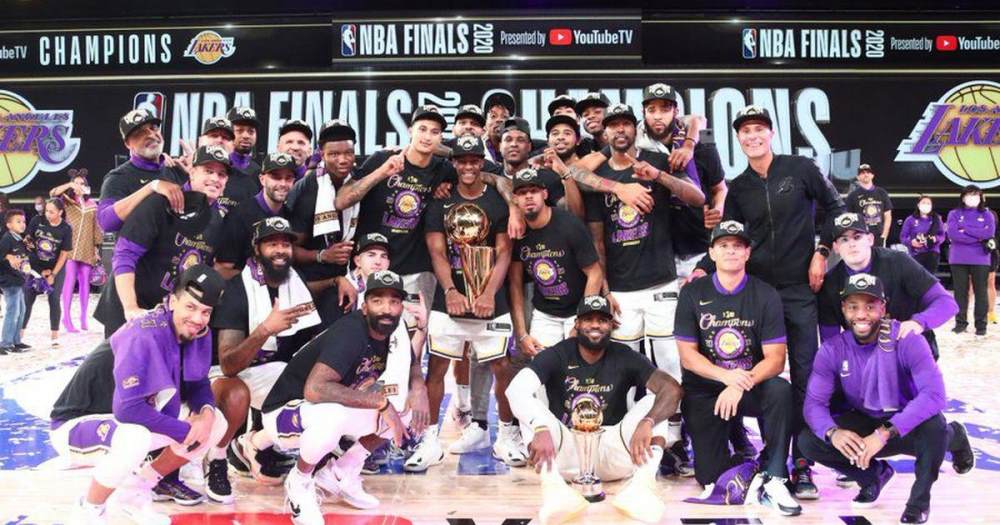 The Los Angeles Lakers defeat the Miami Heat 106-93 to seal a 4-2 series victory in the playoffs awarding them the 2020 champions.

The Finals' MVP LeBron James secured a triple-double, scoring 28 points, 14 rebounds and 10 assists. Both Anthony Davis and Rajon Rondo scored a further 19 points for the Lakers. The victory ties the Lakers with the Boston Celtics for the most NBA championships at 17 titles.

"It means a lot to represent this franchise," said James. "I told (Lakers president) Jeanie Buss when I came here that I was going to put this franchise back in the position where it belongs. LeBron added.

Before the start of this season, the Lakers failed at making the playoffs for six consecutive years. The NBA Finals came to a halt when the wide-spread of Coronavirus took over the globe, hours after it was declared a pandemic and several players tested positive for the virus.

The season re-started on 31st July, but that meant no fans or crowds could be watching the games. Played behind closed doors at Walt Disney World in Florida, the Lakers will now leave as the 2020 Champions after being there for more than 90 days away from friends and family.

The last time the Los Angeles Lakers won a Championship was back in 2010 with the late, great Kobe Bryant. After a sore 2015-2016 season, suffering 65 defeats and only 17 wins the Lake-show needed to re-jiggle their roster. The three-time NBA Champion and NBA Finals MVP LeBron James made the big move from Cleveland to Los Angeles. Shortly after followed up by Anthony Davis in 2019 which ultimately led the team to win the championship as the dynamic two became an unstoppable partnership within the Lakers squad.

LeBron James becomes the first player in NBA history to be named Finals MVP with three different teams in the league (Lakers, Cavaliers and Heat). With four MVPs to his name, he is only two championships away from tying with the iconic Michael Jordan, who won six.

Although victory was claimed by the Lakers it comes within a year in which they lost one of the great, Kobe Bryant.

Kobe Bryant, the five-time NBA champion, who started and ended his career at the Lakers and led them to their last NBA title in 2010, was killed in a helicopter crash in January alongside his young daughter Gianna.

On several occasions the Lakers competed in the 'Black Mamba' jerseys, before their loss in game five of the finals, the Lakers had won all four matches they had played when wearing the jerseys, which was co-designed by Bryant and released in 2017.

"Ever since the tragedy, all we wanted is to do it for him, and we didn't let him down," said Anthony Davis. "It would have been great to do it in the last game in his jerseys, but it made us come down even more aggressive, even more, powerful on both ends of the floor, to make sure we closed it down tonight.

Lakers president Jeanie Buss added. "To Lakers nation, we have been through a heartbreaking tragedy with the loss of our beloved Kobe Bryant and Gianna. Let this trophy serve as a reminder of when we come together, believe in each other, incredible things can happen."

Bryant's widow Vanessa posted a tribute to the Lakers on her Instagram story with a photo of her late husband with Lakers general manager and vice-president Pelinka.

"Wish Kobe and Gigi were here to see this," she wrote. 'We have to continue to push for better days’