#ThrowbackThursday Looking back at Lowkey's classic album 'Soundtrack to the Struggle' 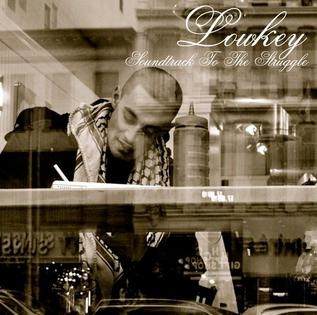 Tomorrow sees 9 years since the release of Lowkey’s ‘Soundtrack to the Struggle.’ Now when this album came out I wasn't planning on buying it. This is pre-streaming days, so buying an album (or acquiring via other nefarious means) was the only way to listen to music. I was aware of the album, I had heard all the singles, watched the videos, I had even seen Lowkey perform live at a charity event, but I was never that inclined to purchase the album. I think I was sceptical about how a whole album of political hip hop might sound.

I was online on the Sunday when the album came out, I had played Sunday league in the morning, so was recovering from both the physical aspect but also the mental aspect of another loss. But in the evening, it seemed like everywhere I went online, people were talking about the album and where it was charting on the iTunes chart. It managed to get #1 on the Hip Hop Album Chart, #3 in Canada, #4 in Australia and #8 in the US, showing that this was an international movement. I fully got caught up in the hype, and I wanted to support, I wanted Lowkey to hopefully get a chart position, so I paid the £7.99 for the album and immediately pressed play.

The opening song, ‘Soundtrack to the Struggle’ with a cinematic beat produced by Nutty P, sees Lowkey starting things off with his announcement that this album was 25 years in the making. Then after his brief opening speech, you hear Mavado’s voice on the hook. Now I have spoke to friends about this before, and all of us felt that as soon as we heard that Mavado chorus, firstly we got gassed, even if it was a sample, it fit so perfectly, and also it was in that moment that we knew this album was going to be something special. This song started the album off perfectly, it is one of the highlights of the album, Lowkey is rapping like a man on a mission, the passion bursting through the speakers. Immediately I was hooked.

Now one of my reservations with “political” hip hop, is striking the balance between the message and the music. Now I love music that has a message (and I also believe that hip hop just in its existence, in intrinsically political, but that’s another point) I just want to be able to enjoy it sonically at the same time. And it is a hard balance to find, people like Kendrick Lamar, Lupe Fiasco, Yasiin Bey, Talib Kweli, Dead Prez and Common have been really successful at presenting potent political messages while also having you can nod your head to.

And with this album, Lowkey managed to strike that balance perfectly on this album, and he did it without sacrificing anything. He didn’t compromise his message at all, from calling out Obama on 'Obama Nation' questioning the difference between what is deemed terrorism by governments and the media and state terrorism on 'Terrorist,' exposing the extent of the weapons industry on ‘Hand On Your Gun’ or calling for a free Palestine on 'Long Live Palestine.' One of the album highlights and a song that I have covered before is 'Dear England' a letter to the country following the 2011 protests. Lowkey had made a name for himself as one of the most politically informed rappers in the UK and on this album he really proved, touching on a wide range of issues that have global consequences. But it never seems preachy, or an essay on a song, instead Lowkey’s lyrical ability allows him to inform listeners on a level that they can relate to.

But the album also isn’t a political manifesto. Lowkey says on the opening track that this album was in the making for a quarter of a century, meaning that he is putting his whole life is into it, not just his political views. Many fans of Lowkey will mention his political songs, but prior to this album, the track that everyone mentioned when speaking about him was ‘Bars for my Brother’ a tribute to his older brother who had passed away. The track was raw and unflinching, Lowkey pouring his heart out on the song. On Soundtrack to the Struggle, we get an update on Lowkey’s grieving process. On ‘Dreamers’ the Lauryn Hill sampled track produced by Last Resort, Lowkey speaks about mental illness and touches on his brother’s death but on ‘Haunted produced by Jetsun he really lays it all out. On ‘Bars for My Brother’ Lowkey is visceral, it sounds like it could have been recorded within days of his brother’s death, but ‘Haunted is more reflective, more philosophical. The beat coupled with Mai Khalil’s vocals provides an ethereal backdrop for Lowkey to float over the track. Where on other tracks Lowkey’s flow is rapid and powerful, on this track it is more conversational, this track feels like an insight into his mind like we haven’t seen before.

This streak of the personal track continues, he discusses the women in his life and other women he admires on the album stand out ‘Something Wonderful.’ He even looks at his own status as a role model on ‘Everything I Am’ and how by some he might be viewed in one way, but by others, it might be different and on ‘My Soul’ he raps about his relationship to the mainstream and his refusal to become a corporate shill. Songs like these provide another aspect of Lowkey that is often not spoken about as much. He is, of course, an incredible rapper, and his political songs have inspired rappers and activists alike, but his introspective songs really provided another dimension to this album.

Going back to striking the balance between music and message comes the topic of production. For this album, Lowkey reached out to a pool of producers who provided a perfect backdrop for his lyrics. Tracks like ‘Too Much’ see Lowkey rapping about the difference between materialistic happiness and genuine happiness. The beat provided by Nutty P takes me back to sunny days anytime I hear it, sampling Lauryn Hill’s ‘Take Too Much’ Nutty P crafts a breezy, soul-filled beat giving Lowkey the perfect platform to deliver his message. This is just one of 6 tracks that Nutty P provides for the album. American producers Beatnick and K-Salaam provide 2 songs including ‘The Butterfly Effect’ one of the only storytelling songs on the album, telling the story of a man whose life has changed it all, looking back at the one moment that brought him to the place he was. Other producers include Red Skull, Big G (Juxta), Sivey, ShowNProve, Quincey Tones, Vendetta, Jetsun and Last Resort. Lowkey’s production selection on the album really lends itself to the journey that he is taking the listener on.

Lowkey seemed very selective with the features he picked for the album, choosing people from all over the world to highlight that the Struggle is a global one. Crazy Haze, an Iraqi Born rapper, features on ‘Terrorist Part 2.’ playing the role of Lowkey’s lawyer, defending him against the charge of terrorism. British Palestinian rapper and singer Shadia Mansour provides the hook for ‘Too Much’ and Syrian singer Mai Khalil provides vocals on 6 tracks.

UK Hip Hop legend Klashnekoff dropped a killer verse on ‘Blood, Sweat and Tears’ on Nutty P with him and Lowkey professing that both of them are making their music for more than just a record deal, that their music represents more than just sales and recognition. The late, great Black the Ripper makes an appearance on ‘Obama Nation Part 2,’ spitting over another Nutty P beat. Samson sounds so comfortable on the track showing the passion and lyrical ability he was so loved for. The other featured artist on the track is M1 of the aforementioned Dead Prez. Dead Prez’s first album ‘Let’s Get Free’ is considered a classic, and they are considered political Hip Hop royalty, so this collaboration is a huge endorsement for Lowkey from one of the US’ premier political hip hop voices.

Speaking of political Hip Hop royalty, the first rapping feature on the album comes from the one and only Immortal Technique. I remember picking up Revolution Vol. 1 and 2 from Dark and Cold and having the guy behind the counter telling me “that’s that real shit.” Lowkey and Immortal Technique trade verses on ‘Voices of the Voiceless.’ Spitting over a Sivey beat, this one was a dream track for many people and it did not disappoint, the 2 juggernauts of Political Hip Hop, one from New York, one London, going toe to toe.

Lowkey really excelled in his selection of featured artists, not choosing to go down the route of artists that might get him radio play or be flavour of the month, but rather choosing artists who fit each track perfectly, each bringing their unique viewpoints to the table and not compromising the message at all.

With this album, Lowkey accomplished many things. In an interview with Charlie Sloth, he said “Say I died tomorrow, I want this album to be the last thing I say to the world and I want people to remember it and to recognize it as me. No one else.” He was able to present his message while also creating a classic Hip Hop album, one that can sit up there when people put together “best political hip hop” or “best UK Hip Hop” lists.

With this album, Lowkey struck the perfect balance between message and music, and I think this is because the message is genuine, it is personal for Lowkey. In the same interview, he said: “The album has just got a lot of heartfelt music that is really and truly an expression of me.” I’ve mentioned songs that were more personal and songs that were more political but the reason why this album works is that for Lowkey these things are one and the same, there is no distinction between the two. Songs like ‘Cradle of Civilisation’ see Lowkey speak about everything that has been inflicted on Iraq, but it is laced with anecdotes of his family’s own experiences. The political tracks are informed by his life and his passion, and the personal tracks are so interlocked with his role as an activist that it gives us an insight as to why he is an activist. The moments of vulnerability are what elevate this album to its heights, lending credence to the message.

The last bars you hear from Lowkey on this album are on the final track ‘Million Man March’ where he says:

I'm merely a corpse, but still be assured, When you kill me there will be a million more

Shortly after it’s release, Lowkey announced he was going to step away from music to concentrate on his studies. Lowkey’s impact on young British activists is something that can’t be measured, and they took up the torch in his absence and the struggle continued, with this as the soundtrack. There is a reason why for years, rappers, DJs, journalists, fans and everyone in between was calling for his return, and the power of this album is that reason.