HomeNewsTeacher has head chopped off in Paris suburb

Teacher has head chopped off in Paris suburb 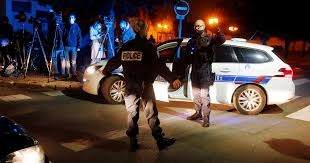 In a terrorist attack, 47-year-old teacher Samuel Paty has had his head cut off.

The attack is said to have been the result of Monsieur Paty having shown images of the prophet Muhammad to his students.

France’s President Emmanuel Macron said it was a "cowardly attack", and the teacher was killed because he "taught the freedom of expression".

The suspected attacker was shot dead by French police a few hundred meters away from the scene in Conflans Sainte-Honorine, North West of Paris.

According to Le Parisien newspaper, the attacker was an 18-year-old man of Chechen origin, who was armed with a knife.

France's anti-terrorism prosecutors have said nine suspects have also been arrested, including the attacker’s grandparents, parents and his 17-year-old brother.

UK foreign secretary Dominic Raab tweeted: "My thoughts are with the people of Conflans-Sainte-Honorine this evening following reports of a truly horrific attack. The UK stands in solidarity with France at this time."