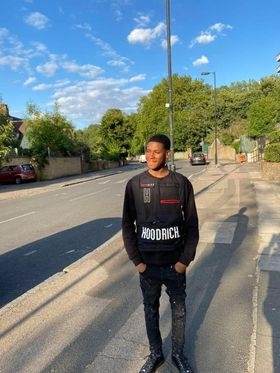 We caught up with south-east London artist Chubz who talks about his pathway into music and how he took inspiration from 90s R&B rappers that shaped his own musical stylings. We spoke to Chubz about his career so far, his aspirations for the future, and the messages within his music. Give the interview a read below.

Who is Chubz, when did he get started?

I grew up in south-east London, Peckham. In primary school, when teachers would ask ‘what do you want to be when you grow up?’ I’d always respond with ‘I want to do music.’

Living with my older sister allowed me to understand music better when I was around 8 I was already listening to 90s music, and that developed to artists such as; Drake, Lil Wayne, and Chris Brown. I think this helped me develop my ear for music.

I’d say I’ve been writing actual structured music since year 7. I even recorded some and released it on Soundcloud throughout the years but never took it as seriously as I am doing now.

What got you into music and what would you like to achieve with it in the future?

I’ve loved music all my life, I think it started from watching shows like 106 and park on BET and going to African parties and hearing the bass from songs. Micheal Jackson was a big inspiration for me to get into music, as I found his songs, videos and dance moves exciting.

With music, I like to constantly develop my creativity and sound. I also want to be very hands-on with everything that goes on from production, marketing, and visuals. I want to grow every year and gain a following not only in the UK but hopefully in Europe.

I’d like to be a voice for my generation and people like me, I want them to hear my songs and find it so relatable that it is as if they wrote it themselves.

Who would you say has had an impact on your music and its creation?

Afro Swing and rap are where a lot of my inspiration came from in terms of sound. Artists such as Jhus, Dave, Mostack, Headie One, and NSG are artists you can create a vibe with, their stuff can be played anytime and at anyplace.

As for creativity, I’d say Drake is a huge inspiration as he is very versatile - something I’m striving to be. I really like creative artists that push boundaries such as Tyler the creator, Billie Eilish, Jaden Smith, and Bryson Tiller.

Where do you see yourself being in five years?

In 5 years I’m trying to be one of the faces of the UK scene, something like a Dave or a Jhus. I hope to do it independently, but if I do need to sign to a label, then I hope to have some leverage before to make sure I get the best deal possible. I want to be financially stable of course and to have a lot of industry connections as I’d like to start my own label and build up artists I see talent in.

If I could only listen to three songs for the rest of my life what would they be and why?

This song will live forever, as it talks about the oppression in society and how we need to change it for the next generations. 2pac is very inspirational to me as he was real and had a wide variety of songs in his catalogue.

I'm not even Nigerian, but I understand that this song is about rising out of struggle and looking back at how far you’ve come.

I don't really have an explanation of this song. I just really like the lyrics and the melodies. It's a song that can make you catch chills.

Where do you think the music scene will be in 10 years? Would YouTube still play a part?

I see artists being more independent and less reliant on labels, this being due to marketing through social media, allowing you to gain a following. I see YouTube still playing a big role in the scene as it will be the only place to view music videos, but this can change if a new app rises up.

What's your message to people your age trying to make music and how important it is to never give it?

My message would be to make music that you would want to hear. I personally make music I want to listen to. If you have a good ear for music, it will lead to a majority of people liking it. In terms of never giving up, you can’t, your one song away from your next hit.

Make sure to check out some of Chubz's track 'Monopoly' below and let us know what you think.