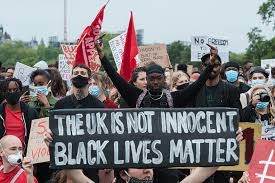 Activists from BLM UK have made the organisation official, and have even changed its name. It has registered as a community benefit society under the name Black Liberation Movement UK.

The group received £1.2m in donations from a GoFundMe appeal following widespread protests earlier this year. But the group had to be registered to access those funds.

The society was registered on 14 September by Adam Elliott Cooper, an academic, Alexandra Wanjiku Kelbert, a PhD student, and Lisa Robinson, a director of a Nottingham-based social enterprise. They have all been involved with the UK group since it was established in 2016.

Elliott Cooper said: “We remain committed and our politics hasn’t changed, and we remain in constant conversation [with] and committed to the network of Black Lives Matter groups across the world.”

A registration document filed with the Financial Conduct Authority says the purpose of the BLM UK community benefit society is to be a “national campaigning organisation which supports black African and black Caribbean communities in the UK”.