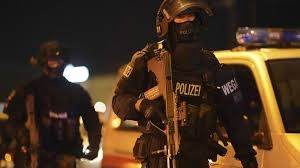 The attack in Vienna, Austria's capital, was said to involve a number of men on the loose with rifles.

Police say the suspects, all Islamic State sympathisers, opened fire across various locations in the city, killing at least two.

One suspect armed with an assault rifle and fake suicide vest was shot dead by police, leaving at least one other gunman at large. The dead man has a previous terrorism conviction, according to officials.

They added that the attackers chose tonight because people would be enjoying their last evening out before lockdown.

The attack started at around 8pm last night near Vienna’s main synagogue.

Vienna’s hospital service reported seven people remain in a life-threatening condition. In total, 17 people are being treated in hospitals, with gunshot wounds but also cuts.

Citing government sources, broadcaster ORF reported that several special forces units have been brought together to search for the “mobile perpetrators” who are still believed to be at large.

As a precaution, the City of Vienna tweeted that it won’t be necessary for children to attend school today.

It said: “Due to the current situation, there will be no compulsory education in Vienna tomorrow. Children can therefore stay at home, excused. For all those for whom this is not possible, the schools are of course open. Stay safe and above all healthy!”