The Streets Will Always Remember...Pogs 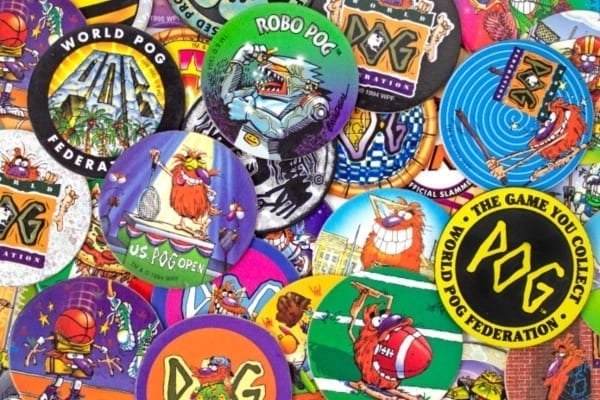 Whether you call them Pogs, milk caps, flipper caps, or Theresa Mays, the impact these circular cardboard disks had on the streets in the early-mid 1990s cannot be denied.

1990s was a strange old time. A period where it was acceptable to blast the Spice Girls while drinking two litres of radioactive Sunny Delight.

Pogs had a humble beginning; starting as a playground game back in Hawaii in the 1920s. The bottle caps from the Haleakala Dairy were the first Pogs ever created. And thus Pogs were brought into the world kicking and flipping.

Some 70 years later and the grubby fingers of capitalism brushed upon an opportunity, with the fad eventually making its way to mainland America. Various images were printed onto cardboard disks, making them more collectable and allowing American companies to use them as a marketing tactic.

Pogs popularity was pretty much down to the World Pog Foundation. Not quite the World Wrestling Federation. But, we guarantee fights have broken out on the playground due to little Timmy having the best Pogs and rubbing it in everybody's faces. The World Pog Foundation was founded by Alan Rypinski, a businessman who acquired the Pog trademark from the Haleakala Dairy. Companies from all over the world battled it out for a chance to get their image on a Pog. So, it came as no surprise when the market started to become oversaturated.

Everything from athletes, political figures, films, television series, and even the pope had Pogs made after them.

The streets will always remember Pogs because of the sheer emotion they brought to British playgrounds and streets. A game of Pogs was tense, dramatic, and had the ability to incite fights and tantrums. A game of Pogs involves putting your collection on the line in a winner takes all situation. If you lose, then you simply kiss goodbye to your Pogs and your playground clout. It got so out of control that schools even banned Pogs. After Tuesday night's performance Manchester United probably wish they could do the same.

If you need a refresh of the rules of Pogs, then we’ve got you covered.

1. The game starts by creating a stack of Pogs face-down. How high is up to you and your friends, but everyone contributes the same number of Pogs.

2. The first player takes a Slammer and throws it at the stack. Remember those? They looked like this…

3. After the slammer has knocked over the stack, the player gets to keep all Pogs that land face-up.

4. The remaining face-down Pogs are re-stacked, and the next player takes his shot.

5. Player with most Pogs wins and keeps his loot — if, that is, you're brave enough to risk a "for keeps" game. (Buzzfeed)

And believe it or not, Pogs are still around today. Just not in the way you remember them. The AAFES (a military department store found on bases around the world) are using Pogs as a type of currency. They decided it wasn’t economical to ship coins to soldiers, so they started to use Pog like disks for money.

The streets will always remember Pogs.