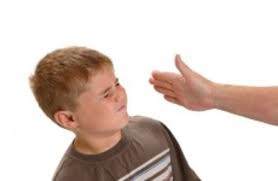 “Kids these days eh, they get away with anything now!” I’m sure we’ve all heard our elders say that at some point.

Well Scotland has stopped gobbling deep-fried Mars Bars with Irn Bru, and has chosen to become the first UK country to outlaw smacking and slapping kids.

‘Forced discipline’, or ‘licks’ as some of us will call it, is now illegal in the costa del Scotland, and the new ban means that the so-called "justifiable assault" - AKA ‘smacking’ - defence is no longer valid.

The move seeks to give children the same protection from 'assault' as adults.

Sweden was the first country on Earth to ban smacking at home when it outlawed parents slapping children in 1979. Scotland has now become the 58th to do so.

A charity spokesperson said: "This law sets out in clear terms that physical punishment should no longer be part of childhood in Scotland and it marks a momentous step in making it a country where children's rights are truly recognised, respected and fulfilled."