HomeNewsWhat's happening in Uganda? Several people killed by the government during Uganda protests

What's happening in Uganda? Several people killed by the government during Uganda protests 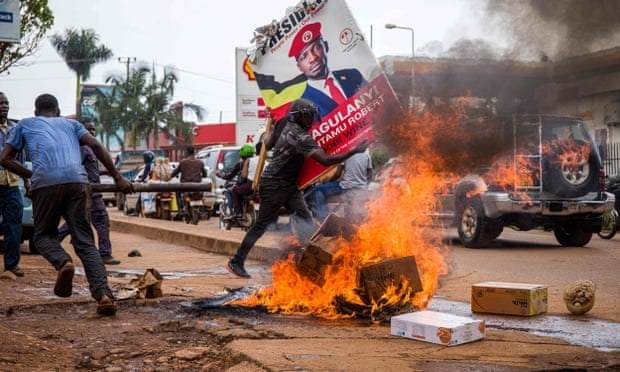 Several innocent people were killed by the Ugandan police for protesting against Ugandan star, Bobi Wine's injustice arrest. Uganda is set for a general election early next year and Bobi Wine is currently running for president. Police arrested Bobi Wine, for no reason at all, and whisked him away to an unknown location days after being tormented by the same police.

I know the video is graphic but this is actually disgusting. The same Ugandan president @KagutaMuseveni has been in office for years and clearly doesn’t want change, so has accepted this behaviour. It’s actually really sad. #UgandaIsBleeding @hellaugandans pic.twitter.com/OsGNRR5kMp

The current president Museveni is allegedly using the police and army to arrest, kidnap, torture and kill people with opposing political views. Bobi Wine supporters hit the streets to protest against his arrest and in response, the Ugandan police have started killing innocent citizens.

The government have decided to threaten the public, who support Bobi Wine going up for election, by running innocent people over and attacking them. RIPlnnocentCivilian #StopPoliceBrutalityinuganda @hellaugandans @ntvuganda #RIPlnnocentCivilian pic.twitter.com/oqlbH6beMP

Known by supporters as “the ghetto president”, Wine is one of a new generation of politicians across Africa who are challenging long-time leaders, hoping to harness deep dissatisfaction among younger, more educated and often urban voters.

He broke into formal politics in 2017 when he won a seat in Uganda’s national assembly and has been since been badly assaulted and detained many times.

David Lewis Rubongoya, secretary general of Wine’s National Unity Platform party, said the arrest of Wine was unfair as Museveni and his supporters had been holding mass rallies.