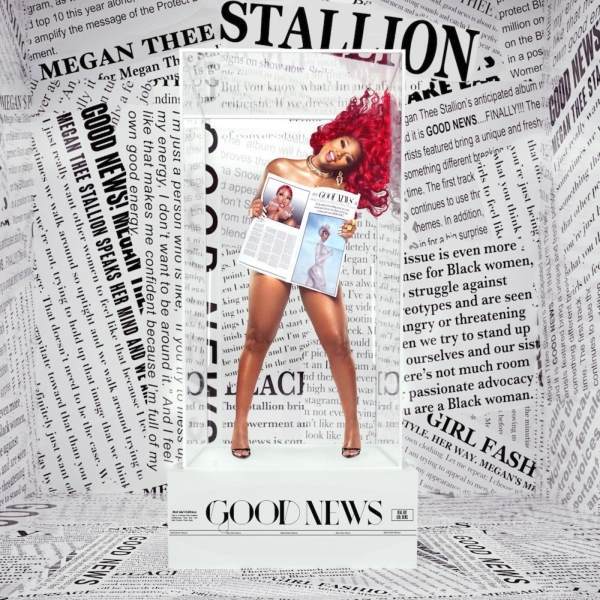 One of the most prominent female artists in the world right now, Megan Thee Stallion finally unleashes her highly anticipated album 'Good News'. Already having had a incredibly successful career so far, including achievements such as winning five BET Awards, including Hip Hop Artist Of The Year as well as an MTV VMA Award, Megan has evidently been more consistent than ever.

Growing throughout 2019 with her album release 'Fever', followed by the sensational certified platinum single 'Hot Girl Summer', featuring Nicki Minaj and Ty Dolla $ign, had expanded her fanbase extraordinarily. Proceeding into 2020 the release of ‘Suga’, garnered over 1.54 billion global streams, spawning ‘Savage’ - one of the biggest summer tracks and TikTok sensations with the #SavageChallenge. Consequently, Megan debuted #1 hit on the Billboard Hot 200 on the original AND the phenomenal remix with the one and only, Beyoncé. Not to mention her exceptional recent collaboration with Cardi B on 'WAP', listed as the highest selling single in over a year, as well as the highest streaming debut week for any track since records began, drawing in over 93 million streams in its first 7 days!

The intentions of 'Good News' being released towards the end of 2020, was to convey the idea that despite experiencing a year full of misery and mishap we can still make our own good news. This album features a number of heavily respected artists such as SZA, Popcaan, Young Thug, City Girls and more delivering an enjoyable range of alternate sounds. Megan's demonstrates her highly approved musical capabilities such as her astoundingly pacey and versatile flows, showcasing her ability to adapt to multiple instrumentals. This operates successfully alongside her sharp and hard-hitting lyricism displaying powerful delivery in her raps.

With production including Tay Keith, Budda Bless, Cool&Dre and more, this has made the album reach the potential it holds, infusing a range of admirable samples throughout the beats used such as Track 2 'Circles'. The Jazmine Sullivan 'Holding You Down', sample was instantly recognised by many audiences providing people with a sense of relatability whilst listening to the new release. From 'Shots Fired' to 'Don't Stop', Meg delivers her extremely distinctive flow on all 17 tracks, proving her remarkable talent and potential as an artist.

Megan Thee Stallion ends 2020 with a huge impact on audiences globally, handled authentically delivering her original sound in which many people admire her for. Being a huge female influence, inspiring her 'Hotties/Hot Girls' fanbase she constantly exceeds her potential in the music scene setting standards for many other artists.

CHECK OUT HER LATEST VISUALS RELEASE TO 'BODY':

Santino Le Saint Headlines The Peckham Renaissance On His Birthday