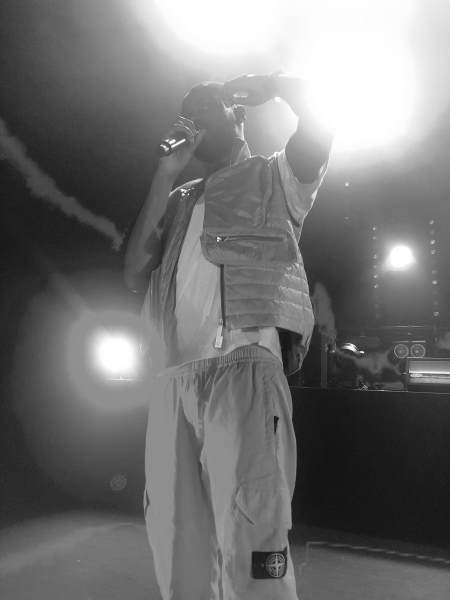 It’s safe to say 2019 has been a crazy year for Dave. A number 1 album, A Mercury Prize and a starring role in Top Boy are just a fraction of the musician’s achievements alongside his sold-out shows across the globe.

Last Thursday – we hopped across the border to watch Dave in what has to be one of his smallest gigs of the year – playing to an audience of just 700 at Paris’ Le Trabendo. Funnily enough, it seems we were just one of many Brits in the audience as it seemed almost half of the crowd had travelled from the UK to watch Santan which only a testament to what kind of performer he is.

Opening up the show was West London Grime Artist Big Zuu. A star in his own right, he kept the hyped with an engaging performance of tracks like The Struggle.

Don’t let the venue capacity make you believe that the gig suffered in any way. From the moment Dave stepped onto the stage with the opening bars to Psycho he had the audience firmly in his palm of his hands. Young or old, male or female – Dave has that power to captivate every single person in the audience with just the power of his words. From tracks like the autobiographical Streatham and the sombre Hangman – we hung on to his every word, felt every emotion and cried out the lyrics in unison.

Being such an up-close and personal venue gave punters more of a chance to interact with Dave in the middle of his set. One notable moment was when a male at the front was acknowledged for repeatedly shouting out “Drop the drill tune.” For backstory, this is based on a snapshot story shared several months ago of Dave rapping over a drill beat. Following that fans have been campaigning, and flooding Dave’s Twitter mentions over the song to no avail. As to his response in Paris – Dave laughed it off and suggested that he may release the track “one day soon.”

Professor X live was a highlight that we would happily relive. The monster track which was released as part Top Boy’s soundtrack went down a storm live and we hope he gets the opportunity to perform it again soon.

Thiago Silva was a pivotal moment of course, with fans beginning to chat for the song from the beginning of the show. It was no surprise to see how eager they were, given that the city birthed the track with TS himself playing for Paris-St-Germain. Dave dressed in his White PSG shirt selected a fan by the name of Jazmin, who had travelled from Manchester to do AJ’s part, and it was a very special performance. First of all – she’s only the 2nd female that’s been invited on the stage to recite the track, and second of all she absolutely nailed every word and we all know how hard AJ Tracey goes on that song, so props to her. A beautiful moment to see the crowd go absolutely insane and even Dave acknowledged how she had given a run for his money.

The sort but sweet set ended with the monster hits Location and Funky Friday. By the end of it, we think we speak for everyone when we were hot, sweaty and felt like we had just done a workout. The overwhelming feeling was happiness at watching such a remarkable talent and to see how far Dave has come. The show is one we will remember for years to come, and we cannot wait to watch Dave grow.