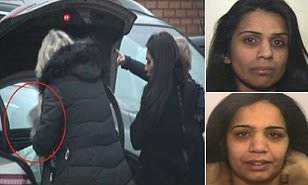 Two sisters turned gangsters running a multi-million-pound drugs ring from their beauty salon business have been jailed for 33 years, alongside 15 others.

Shazia Din, 42, and Abia Din, 45, operated a beauty product supply business in Bury, that was used as a front for a huge drugs trafficking operation.

The Dins were farming out heroin, cocaine, and amphetamines to contacts in South Yorkshire, through the Wrafter family- Peter, 58, and his daughter Natalie.

Drug addicts and those indebted to dealers across Greater Manchester and Yorkshire were recruited as couriers to carry the drugs and cash across borders.

Over 60 kilos of class A drugs, £300,000 in criminal cash, handgun and ammunition were seized following the operation carried out by Greater Manchester Police.