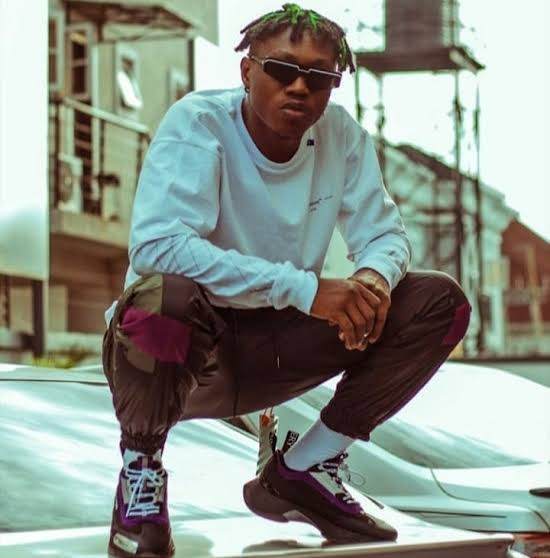 Zlatan Ibile. The Nigerian singer, songwriter, musician and dancer. The 26-year-old gained recognition in 2019 following his single ‘Zanku’ (Legwork) which was accompanied with a viral dance routine. The Afrobeats singer has now dropped 3 albums, launched his own record label, and his latest track ‘Lagos Anthem’ is booming with over a million views on YouTube. So, it only seems right to get the exclusives from the man behind the talent.

Born and raised in Western Nigeria, Zlatan’s lyricism typically touches on growing up in poverty, with his musical inspiration coming from what is around him and where he is from. Before gaining fame, he worked as a brick layer and cut grass for a living, so hopes his relatability motivates those that do not have money to still pursue their dreams. “Work hard, link up with the right people, and pray to God for better days”.

Omoniyi Temidayo Raphael’s professional name ‘Zlatan’ came from his love for Swedish footballer Zlatan Ibrahimovic. “When I was in secondary school, I used to have this Zlatan jersey, so my friends used to call me Zlatan whenever we were playing football in school”. Since starting his music career, he has stuck with the name which originally means ‘golden’.

Initially hoping to follow dreams of becoming a footballer, Zlatan shares how he fell into music by chance. “In Nigeria, it is really hard to pursue your dreams if you’re from the ghetto. I wanted to push my football career, but it wasn’t working out.”

“When I finished secondary school, I started following my friends to the studio and from there one day they told me to come into the booth and try singing. I tried it; we were just joking about. I took the song home, and everyone loved it. From there I started making my music”.

Early in his music career after graduating from secondary school he won the Airtel sponsored “One Mic Campus Tour” music competition where he received a car as a prize. “It was really awesome because I wasn’t expecting it. At that time, I only had one record that wasn’t even professional. In that moment he decided “I need to pursue this goal; this is it for me”. Coming from a religious household with his father being a pastor, this was the moment he gained full support from his family. “My parents that never used to support my music called my sister to have a listening party, they wanted to know what their son must have done to win a car. From then on they’ve been supporting me”.

Zlatan has now gone on to collaborate with artists like Sarkodie and Davido, with his feature on Burna Boy’s ‘Killin Dem’ winning song of the year and best collaboration at The Headies and the African Muzik Magazine Awards. His other tracks include ‘The Matter’, ‘Quilox’, and ‘Cash App’ in collaboration with Bella Shmurda and Lincoln has peaked a high position in the Nigeria Music Charts and number 1 in Ghana.

Discussing Zlatan’s vision behind the music video for ‘Lagos Anthem’, he shares it’s about bringing the community together, understanding his audience, and showcasing the good spirit of the Nigerian people.

Recognised for creating trends, Zlatan shares where his 'Zanku' (legwork) dance inspiration came from: “in Nigeria there’s some ghetto places where you see people actually practising the culture. Where I’m from, we were born to bring out new things and recreate what we have seen”.

Despite the positivity Zlatan has brought with his music, 2020 has undoubtedly been a difficult year, with the #endsars movement being a significant step to fight for change. “I feel like #endsars is part of the things that were supposed to happen in 2020. People have been fighting against police brutality, wanting to find out more information, and raise awareness. I hope the government do make a change so everyone can enjoy a better Nigeria”.

Zlatan Ibile reveals he has already recorded songs with UK artists Not3s, Geko, and NSG which will be released in the new year. Sharing his thoughts on where the Afrobeats genre stands he says “We’re just trying our best. I feel like Afrobeats is doing great and I expect it to get even better”.

2021 holds an exciting journey for the Nigerian musical sensational, and one where he will continue to rise with his highly anticipated “back-to-back drops”. Ending the interview on a high, here is a message to all his fans:

“Maximum respect to all my supporters, I appreciate everyone, God bless you. One love”.

Check out 'Lagos Anthem' visuals below: