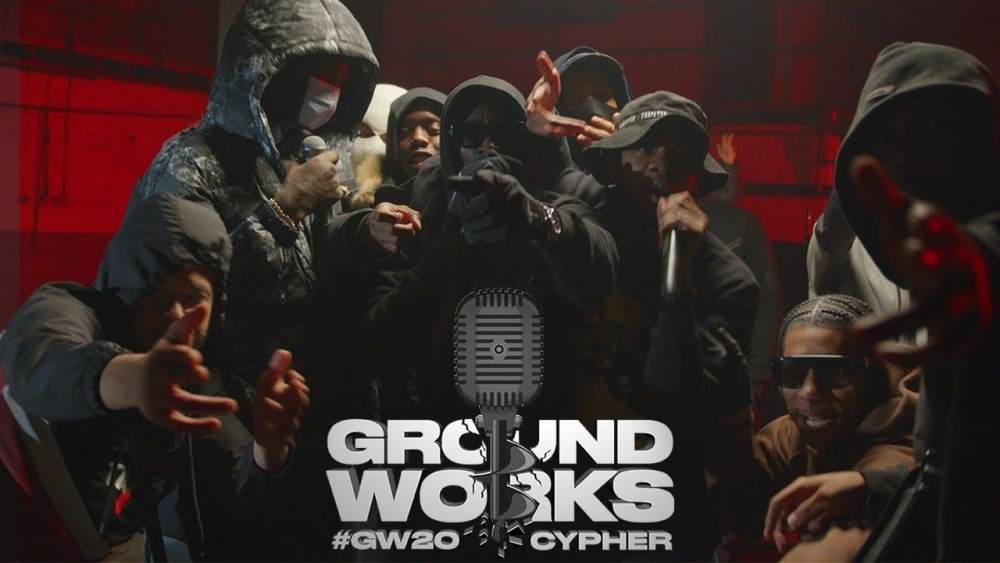 Originating from an extremely memorable era of US hip-hop, Chicago drill, UK grime and garage, the significant influence of all genres combined have consequently formed the music we consume today. The rise of cypher’s including the 1999 New York cypher, 2016 XXL Freshman to the recent Groundworks 2020, shows the authenticity and similarities within rap, yet still showing a gradual progression in sound.

Initiated by Groundworks - A UK based creative consultancy, working with some of the most prominent names in the current music scene, alongside RichPower Production have surprised audiences by unleashing an exhilarating 2020 cypher. Dedicated to the popular genre of drill, artists involved include; Digga D, Teeway, Trap10x, #TPM – M1llionz, Tugz, Tallerz, M Woo, SkengTrapMob and #98s (Unknown T, KO, Billy Billions, DA, Mazza, V9, Alchubbino, Jimmy). Many of these rappers have made a noticeable impact on the UK scene, showcasing incredible individualism throughout their evident talent and capabilities as artists. Groundworks treats us with an hour-long special viewing experience of the UK scene’s future of the industry, re-sparking the nostalgic excitement felt during previous cyphers. It is undeniable that Groundworks have successfully resurfaced a concept widely loved by audiences, pioneering new additional elements adaptive to today’s industry.

Hosted by two of the scene’s most approved YouTubers, Denz and Renz enlist multiple industry figures such as Potter Payper, M Huncho, Mimi The Music Blogger and ProdByWalkz to introduce the cypher. Unknown T and Digga D instantly react on the climatic build-up created, showing their familiar chemistry with one another. They go back to back delivering hard-hitting bars, displaying their ability to switch up their jumpy flows with ease. The idea that both artists are so individually talented proves their genuine independent skill. Digga D’s significance throughout this Cypher is so appealing as it reminds us of his 1011 rapper days, displaying very raw, wordplay on drill. As inspiring as it is to see Digga D’s progression since this cypher undoubtedly allowed people to acknowledge that he can still rap like this whilst simultaneously being able to make hits like ‘Woi’.

In terms of Unknown T, he brings so much energy to every single verse that he is renowned for his lively body language and hand gestures. His presence in the UK scene is there without a doubt and only becomes even more visible with the rest of the 98s collective. Additionally, DA, KO and Billy Billions were a hit favourite for many listeners, ranging from the witty lyricism, consistent flows and the compelling versatility of Billy’s vocal ability in singing. The performances from V9, Mazza, Alchubbino and Jimmy also contributed to the overall outcome of the 98s delivery each having their own, personal creative attributes that contribute to solidifying the collective as a whole.

The diversity shown within UK music is paid attention to within this cypher, with a drill scene heavily dominated in London, Groundworks included Birmingham’s prominent upcomers under Ten Percent Management (#TPM). One of the country’s most increasingly unique and versatile artists – M1llionz, confidently holds weight in this cypher alongside fellow rappers Tugz, Tallerz, M Woo and SkengTrapMob. All 5 artists present their energetic flows, clever wordplay emphasised by the reciting of their recent collaboration ‘Experience’, creating an abundance of excitement within the cypher. M1llionz’s also showed dynamic energy with Digga D throughout, showing his ability to adapt and work with different artist’s sounds effectively. This definitely put the #TPM artists in a wider, more accessible public eye making it likely to expect much more from them going into 2021.

Carrying the entire of South London on their back, Teeway and Trapx10 came through and effortlessly delivered. Teeway is undeniably a special, yet still, underrated drill artist, who is going to shock some audiences as we progress into the coming months. Performing well delivered, structured bars with a very monotone and intriguing flow, Teeway presents a highly distinctive aura within the cypher. His presence is extremely powerful without having to display too much energy, which is an attribute many audiences enjoy about him. With the versatility he holds, a top position in the UK drill scene is open for him without a doubt. Trapx10 also comes through and holds his ground with multiple characteristics proving his capabilities as an artist, predominately through witty, lyrical wordplay.

One of the most dominant features within this cypher that makes it so unique, is its contribution to the UK producer industry. It included over 20 different beats from some of the best producers, allowing the artists and the cypher itself to successfully fulfil its full potential. Throughout 2020, there was an increased, rightfully deserved level of recognition for producers on their part in constructing hugely important components within the music. In this cypher, the producers involved include:

It is undebatable that Groundworks have unlocked a progressively advanced cypher edition, considering all creative aspects ranging from the popular hosts and the influence of public figures and prominent artists to the inclusiveness of the UK producer industry. With a complete set of drill artists on one platform, this gives the genre extensive exposure to reach larger masses hoping to widen the UK drill scene to further lengths. Most importantly, although these new changes have been made, the authenticity and excitement of the actual cypher still stand, such as one beat shared amongst a group of artists at each time, the wheel ups, and best of all the pressure to perform. This still allows audiences to resonate with a sense of nostalgia and originality.

Take in the Groundworks 2020 Cypher Below!