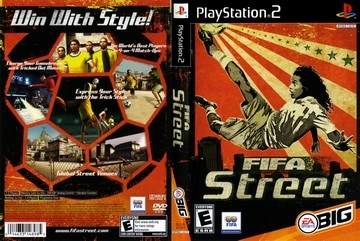 The festive period was a strange one this year, it came without a bang, and left without one, leaving us a little bit underwhelmed.

The crazy times we are living in evidently had a lot to do with that. However, perhaps the magic was missing due to the selection of gifts as well. It seems that Apple Watches and Smart Devices topped everybody’s list this year, which in my opinion, it’s a waste of money.

I mean sure they are amazing technological advancements but do you ever feel we’ve gone too far?

Reminiscing about this 2005 classic is something we can get behind. This game was generation-defining, and 16 years ago it would have topped the list of just about any child.

This spin-off on the FIFA series of football games was beloved by the many. The streets have been doing a bird call for its return for a hot minute.

If FIFA Street is remembered for just one thing, it will be the number of insane tricks you could perform on it. You had the classical ‘Stepover’ which always looked sublime if pulled off correctly. The colourful ‘Rainbow Flick’ that may as well be retired to the legendary
Ronaldinho. Plus, If you were feeling lucky you could always have a go at the “Roulette” which was potentially one of the most used tricks on the entire game.

The beautiful thing about FIFA Street was that it was FIFA but in a 4-on-4 situation. Tricks and flair were used at every opportunity and still to this day, a game like this is yet to be replicated.

The aim of FIFA Street was simple - build a team of world-class players and take on the football scene as you visit street venus across the globe. Formations and tactics went out the window as you embraced the culture of street football, whether that be Rio de Janeiro or in Lagos.

Playable players in this game are pretty ridiculous when you think about it with the likes of Ronaldinho, Thierry Henry, Deco, Raul, Cristiano Ronaldo and Adriano, to name a few.

The streets couldn’t forget this one if they tried. This game was a staple for many, and it was released at a much simpler time where games felt like they had purpose and you could truly submerge yourself into it.

FIFA Street was the maddest game around, and it appears EA are making efforts to bring it back with ‘Volta Football’.

But it will never have anything on the legendary FIFA Street.

The Streets Will Always Remember...FIFA Street