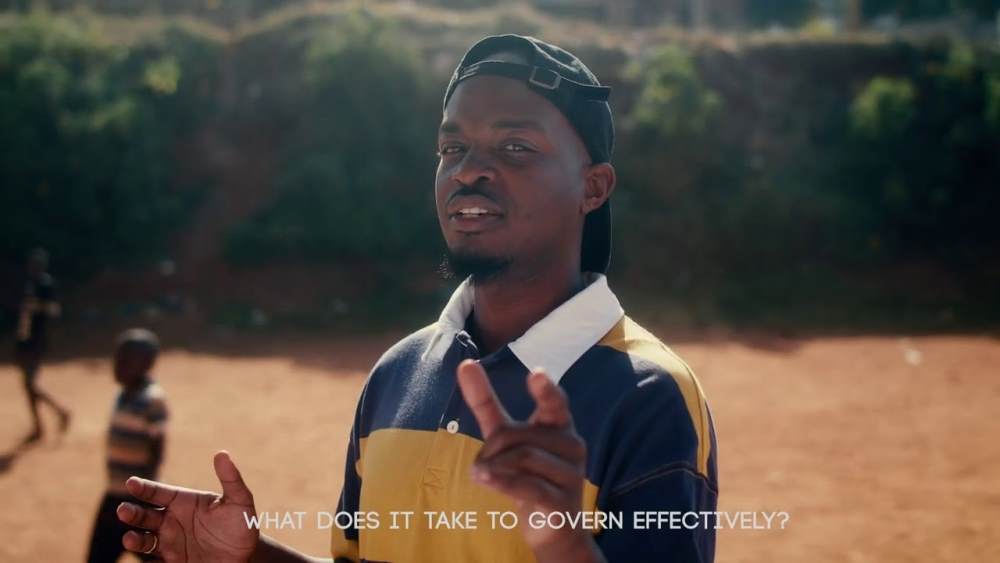 Born George Mpanga, he was raised in London and has had a unique impact on our music and culture. His brand of spoken word and musical poetry has led to critical acclaim as a recording artist and as a social commentator.

Many around the world speculate that Reggae singer turned politician Bobi Wine can derail Yoweri Museveni’s sixth consecutive presidential bid, and George’s film casts a critical glaze over their controversial historical electoral process. He points out that actually, definitive change can come from outside politics: through music.

George gives us an insight into his own decade of growth, personally and professionally to begin with. Taking us through his passion for politics and a burning desire to affect change from an early age. He outlines the oxymoronic society that young black people exist in, and his own realisation that spoken word and music was the central avenue to speak to his targeted demographic.

He seamlessly transitions from his personal struggles to that of his native Uganda, calmly paralleling their political unrest with the social responsibility that anyone with Ugandan heritage has to understand how damaging the past 40-years have been for the country.

This is a unifying short film which marries together sound and politics in a fashion that only George could do proper justice. It has a range of shots, from performance in Uganda to screen records over zoom – a nod to the current state of affairs back home.

Preceding the film’s release George had something to say about it too.

“Like many Ugandans, I’m concerned about our country. Politics divides our people, just like it does in the West, and everyone feels frustrated. Police brutality, civilian deaths and military involvement are regular features of our elections – this is not normal. No Ugandan has seen a peaceful transfer of power since colonisation and no Ugandan under 35 has seen a transfer of power at all.

“I don’t believe the country’s future can be reduced to an election result, I do believe Ugandans will find a way. I believe our young nation has potential that none of its leaders can fully control.

“For many Ugandans, like me, this starts with the creative arts. For others it could be cultural education, or responsible agribusiness Our country’s future isn’t just in the hands of the next government – it’s in the destiny of all Ugandans.

“Home and abroad, we’re all represented by the same flag: black, yellow and red”

You can find the short film below.