HomeNewsDC Future State introduces 'The Next Batman' as a Black male 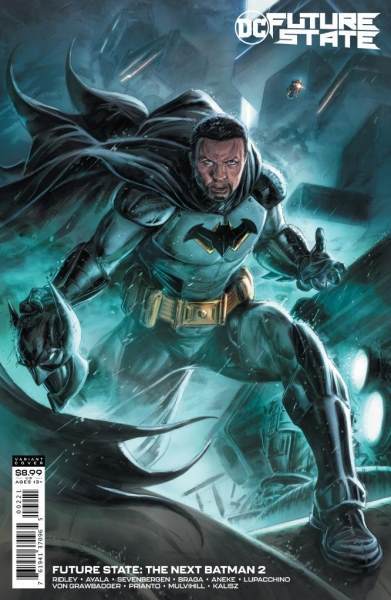 Time fox is the son of Lucious Fox, you know the guy that Morgan Freeman plays in Christopher Nolan's Dark Knight starring Christian Bale. Lucious Fox first appeared in a Batman comic in 1979 and as we know he's Bruce Waynes' business manager at Wayne Enterprises as well as equipping the cape crusader in his operations. If you manage to keep up to date in the comic book world you'll also know that Tim Fox is has a brother by the name of Luke Fox and is the former Batwing. A sidekick to Batman if you like.

Gotham's future is in his hands 🦇 Tim Fox is the Next Batman — meet him before #DCFutureState here ⏩ https://t.co/GbbqM1esgE pic.twitter.com/yXA5fFoUis

The distant son of Wayne Enterprise's CEO and brother to the former Batwing Luke Fox will take the mantle in the Batman's cowl, starring in the new "Future State" series, "The Next Batman."

Screenwriter of "12 Years a Slave," John Ridley will write the four-issue miniseries, with art by Doug Braithwaite and Diego Rodriguez.

"Future State: The Next Batman" arrived on January 5, 2021, with new issues available every other week. If you do some digging I'm sure you'll be able to find a couple of copies online.

'In The Future State: Batman chapters, wearing a mask in Gotham City is now a crime and when it's compounded with murder, it can be a shoot-on-sight offence! Batman is on the trail of a murderous couple but quickly finds that all is not as it seems...and finds himself in the firing line of the Magistrate and their Peacekeepers! The gritty, street-level adventures of the new Dark Knight continue!' – DC Comics.

With the Ultimate Spider-Man, Miles Morales and now Tim Fox as The Next Batman let's hope we can see more diverse representation in our entertainment. Maybe Val-Zod, the Back Superman movie starring Michael B. Jordan?

Just throwing it out there...